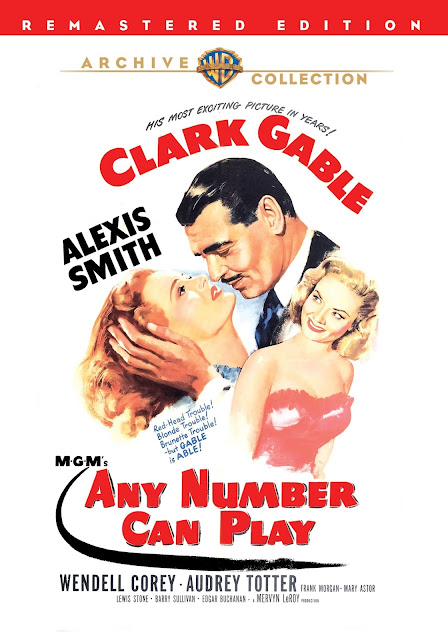 Watched:  03/08/2021
Format:  Amazon Watch Party
Viewing:  First
Decade:  1940's
Director:  Mervyn LeRoy
Trying to be an Audrey Totter completionist, I had planned to watch this movie at some point, but just never got to it.  Had I known how many people are in the film, I probably would have watched it years ago.
Beyond Totter, the headline stars are Clark Gable and Alexis Smith, but there's also:  Barry Sullivan, Frank Morgan, Mary Astor, Wendell Corey, Leon Ames, William Conrad, and a whole bunch more you're going to recognize.
I thought it was *fine*, but I just checked and - holy cats - do people seem to hate this movie.  There's complaints about "this movie takes place within a casino and doesn't moralize about gambling" which is... a take, I guess. It kind of misses or dismisses the actual morals of the film (don't forget your family on your way to #1, the path to friendship and respect is via truth, honesty and fairplay no matter what you do for a living), but don't let that get in the way of a good complaint.
It's certainly not the first movie to show a man in crisis/ at the end of his rope and how it resolves in a single night as all the threads come together.  But it's the earliest one I've seen that I can think of.  Until I think of one I've seen from earlier.
I admit, the movie moved a bit slowly, and despite plastering Audrey Totter all over the poster, she honestly wasn't in it much.  Still, she's having fun playing the bad girl and fed-up wife (something she was doing a lot in this era) of Wendell Corey.  It's nothing I'd go out of my way to recommend, but once I clocked to what they were doing, I did enjoy it a bit more.
Anyway - it's a gamble to watch it.
Posted by The League at 3/09/2021 10:45:00 PM