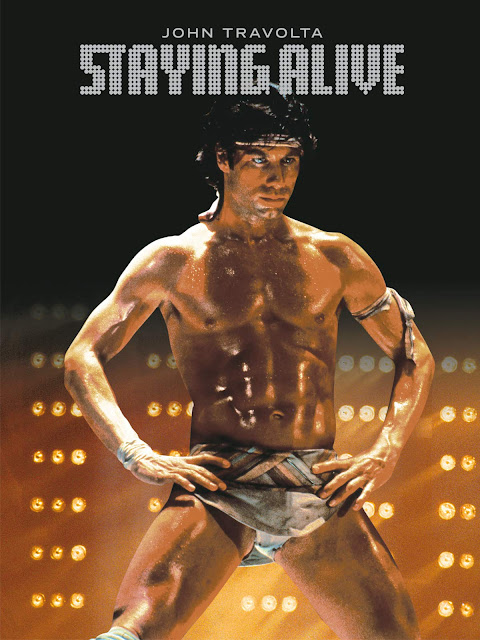 Watched:  03/12/2021
Format:  Amazon Watch Party
Viewing:  I dunno.  First?  I don't remember 95% of this if I saw it.
Decade:  1980's
Director:  Sylvester Stallone
Staying Alive (1983) is the un-asked-for sequel to the 70's cultural phenomenon, Saturday Night Fever.  If you've not seen Saturday Night Fever in a bit, it's not all about Travolta as king of the disco, it's also a story about directionless young people, misdirected energy, and generational schizms in a traditional family.
Staying Alive picks up six years later and is terrible.
Look, the point of the first movie was realizing the world was bigger and better than a disco on a Saturday night, but six years later, Tony has made maybe incremental progress and danced his way to a 0% bodyfat physique.  Stephanie from the first film is just... gone.  She has a surrogate character in Jackie, who is doing her best to look like a JJazzercised  Anne Murray.  Jackie is Tony's friend with benefits.  I thought she was supposed to be the female lead from the first movie, but she is not.  So, we basically know nothing about her aside from the fact that she's a doormat who Tony steps out on and then TELLS HER ABOUT IT.
Tony stumbles upon apparently popular Broadway entertainer Laura (Finola Hughes) and engages in maybe the single worst two minutes of flirting on film I can recall in a movie that enables him to gain her attention - when she should have been calling the police as there's NO WAY she wouldn't be fearing for her life through the whole scene.
If you don't know Hughes, she's a soap opera star who has managed to carry her character across both General Hospital and All My Children.  Nerds here might know her from (a) playing Emma Frost in the horrendous Generation X TV movie when Marvel was doing that, (b) as the voice of Lara in the cartoon of Superman: The Animated Series, or (c) as Lady Shiva on Beware the Batman.  Here, she's a rich English person - the single greatest threat a working-class underdog could face in a 1980's movie, and this one is casual sexually as Travolta's Tony and that is CONFUSING to Tony.
You can tell the movie is directed by Stallone because (a) it features brother Frank Stallone in a part looking like a melted Sylvester Stallone, (b) it features - inexplicably - a lot of Frank Stallone music, and (c) where the Rocky movies he directed featured a boxing match at the end where things were sorted out - this one features a Broadway show's opening night, where - apparently - blocking and choreography are OPTIONAL - and every decision Tony makes to do his own thing is magic.
Now, it is also not clear that anyone above the line in this movie had ever scene a Broadway musical.  They seem to think it's just people dancing furiously to pre-recorded music, like a stage show at Six Flags.  No singing.  No talking.  Only a jot of a story that I'll be dipped if I can figure out, but I think it ends with Tony going to the Heavyside Layer.  But, yes, two different shows are presented, and it's just... dancing.  Which is important to a musical!  But, also,  Singing.  Live music, often.  And, yeah, a story.
Before opening night, Tony manages to dethrone the lead dancer who just can't get that the director wants this dance-play to be SEXY.  Which I could have forewarned the director about based solely on the guy's terrible haircut - but this means that Tony must now work out the fact Fiona Hughes just wasn't that into him (and that shit will not stand) by dance-fighting her and light sexually assualting her on stage.
Now, I have questions, because literally everyone else on stage has to run around in BDSM outfits or a diaper, except for Fiona Hughes who sports a red unitard the whole time (she's, like, a devil), as well as co-star Cynthia Rhodes - like I guess their contracts must have said "no.  Just, no."
Anyway - there's probably a story here, but I don't know what it was supposed to be - but following a character as our hero who is both dumb as rocks and a bad person and shows no redeeming qualities is a big ask.  And it absolutely does not pay off.  Even the BeeGees tunes are forgettable, and the movie absolutely insists on Frank Stallone.
So.  If you want to hear the same song say "DANCE" "FIRE" over and over, sure, go for it.
Posted by The League at 3/15/2021 12:54:00 AM