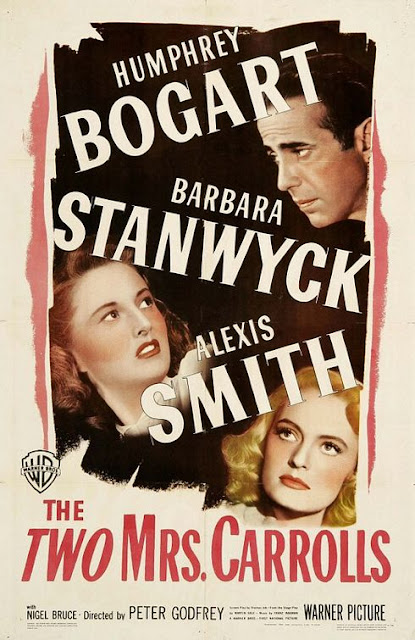 Watched:  05/16/2021
Format:  TCM on DVR from forever ago
Viewing:  First
Decade:  1940's
Director:  Peter Godfrey
Well, we often talk about how you can see the roots of Lifetime movies in the films of the past, and I'd certainly argue The Two Mrs. Carrolls (1947) absolutely fits the bill here.
SPOILERS
This one wants to be a slow-burn gothic thriller/ murder story, and has a collection of the pieces necessary, but it's so... wacky, it plays better as near-camp in 2021.  Stanwyck is a woman inperiled, but, by god, she's going to look like a million bucks in Edith Head gowns while bed-ridden and menaced by her own husband.
Knowing nothing about the movie ahead of time, I thought I'd signed us up for a melodrama - which is fine, but not my jam so much - about a man stuck in a loveless marriage who meets a woman he does love.  Instead, we figure our Mr. Carroll has, instead, murdered his first wife with whom he has a ridiculously precocious child, so he will be free to marry Stanwyck.  The slow death of his wife as he poisons her also gives him fuel for a now famous painting of his wife as "The Angel of Death".
Well, all is well til Bogart starts a tryst with Alexis Smith (who looks amazing here in some outstanding outfits), and he starts up on the "better murder the wife" scheme again.
I mean, it's the kind of movie where I confidently shouted, "lady, get outta there" at the TV, and felt fine doing so.  It's not that Stanwyck isn't doing a good job of look terrified that her husband is likely slowly murdering her, but that the whole set-up feels kind of bananas and complete with a set of supporting characters that feel like someone shook them out of a pre-war comedy.
Also - everyone but Bogart is supposed to be English, and for some reason Stanwyck just sounds like Stanwyck.
I had a good time watching the film - it's paced well, has a lot of tension baked in, and you certainly feel for Stanwyck as she figures out what's happening.  And Smith and Stanwyck's outfits in the overly ornate set are something to behold.  But Bogart is playing wild-eyed crazy and hoo-boy, did he need to dial it back some.   And, of course, his character is The King of Red Flags.
But, at least he got to just be crazy and not have a lot of goofy "we explain crazy as a brain science problem!" couching like we'd see soon after.
And, hey, Alexis Smith can really rock a leopard print coat, is my big takeway from the movie.
Posted by The League at 5/16/2021 11:41:00 PM