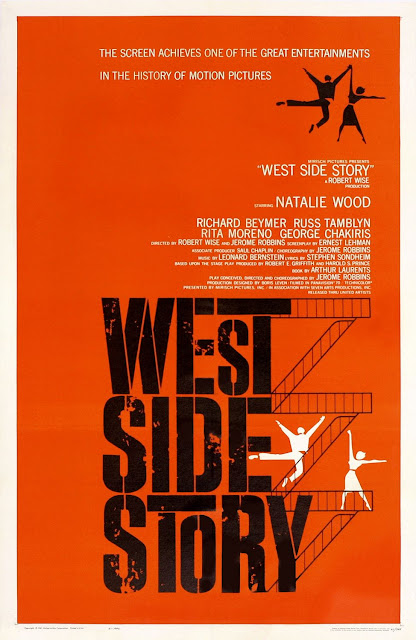 Watched:  07/10/2021
Format:  TCM on DVR
Viewing:  Unknown
Decade:  1960's
Director:  Robert Wise/ Jerome Robbins
So...  it'd been a while since I'd seen West Side Story (1961).  No real new insight here, but... the re-make (by Spielberg, coming soon) is going to drive all sorts of discussions when The Kids figure out people have been aware of many of today's social issues for... ever.  And it's not comforting that we're not many steps forward from where we were in the 1950's when the play was written.
Also - expect people to freak out that the last 1/3rd of the musical, just as you may remember Romeo and Juliet, is just super depressing.  Like, no one is a hero in this thing.  Maybe Maria.  And even Anita's attempts to warn Tony almost lead to outright rape at the hands of the very guys she's momentarily holding blameless for her love's death.
I recorded the movie during TCM's Film Fest, but we just never made time for it (it's not short).  But 60 years on, the movie continues to surprise with the choreography matched with stunning cinematography.  It's just an incredible use of the lens and even some post-production effects put in.
And, of course, the music is an American staple at this point, written by some of the greatest in 20th Century music, in Leonard Bernstein and Stephen Sondheim.
Before the film, TCM conducted an interview with Rita Moreno, George Chakiris and Russ Tamblyn - apparently all friends since working on the movie.  They got kind of real about the infamously tough choreographer Jerome Robbins, as well as the studio making the Puerto Ricans wear matching, heavy make-up in the film.  Well worth catching the conversation if you haven't seen it.
There's numerous reasons the movie has held up over the years, and why it continues to feel present.  And there's plenty of ink spilled on that.  So, before you go off and watch the coming remake and wonder if they changed things (they can and they will), go out and watch the original to see how incredibly groundbreaking it really was and how musicals still don't seem to quite capture what Wise and Robbins managed to get here.
Posted by The League at 7/12/2021 12:32:00 AM