Mixed-Feelings Watch: Man on a Tightrope (1953) 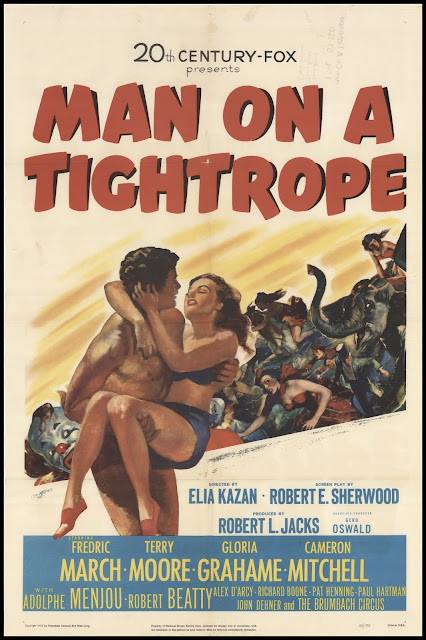 Watched:  09/23/2021
Format:  TCM on DVR
Viewing:  First
Decade:  1950's
Director:  Elia Kazan
I'm somewhat shocked I'd never heard of this movie before.  But, that's what TCM is all about - pulling out movies from the library and saying "here you go.  This one's solid.  Folks used to know how to make a movie, huh?"
Brought to TCM on a night in which Dana Delaney co-hosted (with Eddie Muller) a slate of films featuring screen legend Gloria Grahame, Delaney came ready to talk.
Look - I have some mixed feelings on this one.  It's a terrific movie.  I believe in the conceit of the film, and I think Muller explained it as well as you could, so I'm in a hard-agree mode.  As much as I generally agree that Kazan is an amazing director, the guy named names during HUAC that did a lot of damage.
So, when a movie is about the iron grip of post WWII Soviet-style governance in Czechoslovakia, and how it pushes an a-political head of a circus to consider his options...  well, I tend to agree with anyone who wasn't a fan of Stalinism or the authoritarian/ police-state governance employed in Eastern Europe.  This movie could easily spin up a TL;DR post or a full college thesis, but... I'll be merciful.
Our plot:  Frederic March plays the former owner of a circus (now owned by "the people"), who has seen his formerly grand operation reduced to a shell of it's former self.  He's managed to continue on, but under the eye of the secret police.  They've gone far enough to make suggestions to rewrite the clown act to make it about ridiculing American bankers.
March's daughter has fallen for a drifter who has joined up with the circus (Cameron Mitchell, of all people), and March's second wife is played in - I'll go ahead and say it - one of her most unusual but strongest roles.
The movie is filmed in Germany, using a real circus (The Brumbach Circus).  The photography isn't documentarian, but the look is mostly free of Halloween sheen, preferring the run-down look of the characters living their now hard-scrabble lives in the circus.  Everyone's living not just in a post WWII world, but in a world that is rapidly changing and - while claiming it's of the people - Kazan doesn't shy away from what a fraud the idea is as officers enjoy pampering, police enjoy abusive positions of power, and everyone else can live in fear and figure out how to survive and not get run over by the political machinery.
If you've seen any movies about the police-state of Eastern Europe, which most of us Gen-X'ers grew up on, then much of this will seem maybe a little rote - but this movie came out in 1953!  No, we weren't playing super nice with the Commies at this point, but the clear fury the movie directs toward what's become of Europe is evident.  And, as history would bear out, properly earned.
It's impossible to watch and not ponder Kazan's own political affiliations and his infamous actions.  The movie is not apolitical, but it's also not about pre-WWII loose affiliations with worker's parties, either.  The courage to defy the state and try to outwit the state (any country trying to keep you in with fences is not a country "of the people") is worth noting.  And, so, yeah, in its own way its a "triumph of the human spirit" kind of film, but one that feels about 15-20 years ahead of its time.  Really good stuff.
To Muller's point with which I agree - the politics of the film itself are almost moot.  Any political system can devolve into a police state and oppression, and that's where the film has a universal picture that passes over the thoughts you may have about Kazan and Communism or HUAC.  There's definitely some specific messaging in the movie that one can see as how communism specifically can be insidious if used as a bludgeon or to foment long standing resentments, and it's not a conversation without merit.  But the larger picture presented is still an important one, and a reminder of the madness that can creep into any government when it tilts toward authoritariansim.
Posted by The League at 9/25/2021 10:21:00 AM

It's a *great* question. There's a bit of a quiet culture war right now about showing movies from after 1979, but I think everyone is now recognizing that 40 years or so after a movie came out, it's fair to say it can be a "classic", but they've pushed all the way into this millennium upon occasion. What KIND of movies? I couldn't begin to say. TCM Presents Fast and the Furious Weekend is entirely a possibility.