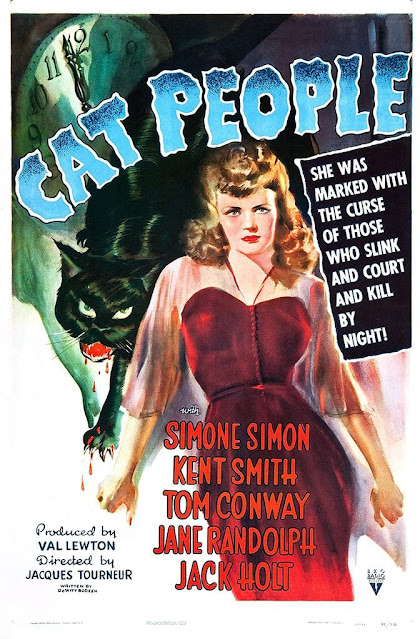 Watched:  10/31/2021
Format:  TCM Noir Alley
Viewing:  Third?
Decade:  1940's
Director:  Jacques Tourneau
I have watched this movie at least 1.75 times before, and found it odd and boring.  But I think, honestly, I must have picked up my phone or computer or something and quit watching.  Because this time...  holy cats (so to speak), I *finally* got what this movie was all about.
Honestly, I'd read so much about how great this movie was - I'd given it a go - but thought it was overhyped.  And frankly didn't know what people were talking about.  It literally almost felt like I had seen a different cut or something that missed all the good stuff when I'd previously seen this movie - because once you get to the petshop sequence, things really kick into gear here.
Anyway - THAT is the best possible case for a rewatch!  Trust in Eddie Muller if he's going to do a Halloween episode of Noir Alley!
Yes, the movie is the one where a cute woman is picked up by a typically dunder-headed American-male of the 1940's-1950's who considers all women the same, interchangeable wife-bots - where you just pick the aesthetic you like - and finds out:  whoops.  I married either a crazy person or a were-panther.  Either way:  there's a reason you may want to give pre-marital coitus a try before finding out she thinks doing so will lead to her transformation to a monstrosity.  And not in a fun way.
It is true, intentionally or otherwise, our lead is a handsome moron (I think intentionally), and the weight of what's going on is put on the shoulders of his new bride slowly going mad, were-panther or not, as she grapples with being unable to love.
It's A LOT, and it is the most noiry-noir looking of movies.  That Tourneau is not afraid of a good shadow and what happens in those shadows.
Anyhoo...  highly recommended.
Can't believe they got away with this under the production code.
Posted by The League at 10/31/2021 12:08:00 PM