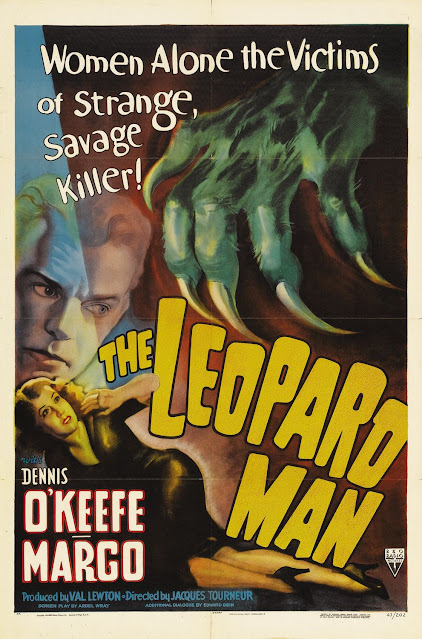 Watched:  10/30/2021
Format:  TCM Noir Alley
Viewing:  First
Decade:  1940's
Director:  Jacques Tourneur
A very short film that manages to pack in what seems the plot and thrills of something much longer, The Leopard Man (1943) just uses a title that makes it sound like a sequel to The Cat People but delivers and entirely different thrill (or maybe not?).
I *loved* this movie.  Great characters.  Misdirection.  A few scenes with genuine terror.  Beautifully shot and imagined.  This is the Val Lewton/ Jacques Tourneau you hear about in classic film circles.  For me - an unexpected ending that's terrifically framed.  I have no notes!
My understanding is that this is not just based on a Cornell Woolrich novel, but really sticks to the source material, even what's seen in specific characters' POVs.  I need to read some Woolrich.
I also was surprised to hear discussion of genocide of indigenous people by colonizing forces even mentioned, let alone treated as a tragedy.
SPOILERS
As part of Noir Alley, Muller noted this was maybe the first "slasher" movie, and that could be debated til the cows come home.  But it absolutely has some of those elements, and this is 1943.
I'll be honest, both the scenes of the poor girl being sent for masa knowing it's a death sentence and Margo going back out for her lost money were... yikes.  All of which played into the ending very, very well.
Also very much dug the fortune teller who feels like a lost sister to Marlene Dietrich in Touch of Evil.  Knowing people are @#$%'d is a curse unto itself.
Consider me a fan.
Posted by The League at 11/02/2021 11:56:00 AM