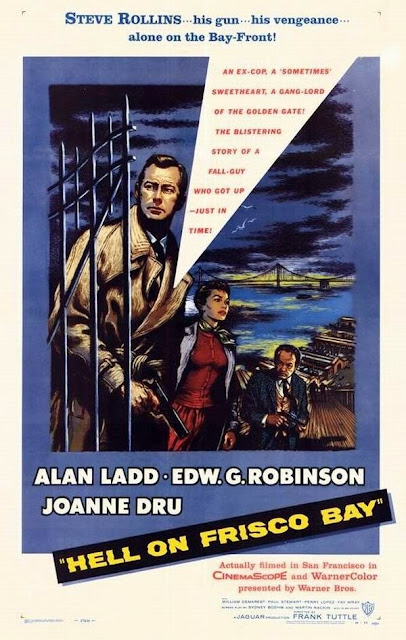 Watched:  11/04/2021
Format:  BluRay
Viewing:  First
Decade:  1950's
Director:  Frank Tuttle
This was not at all what I was expecting.  It feels almost like a rough draft of something like Heat, where we see both sides of the cop and criminal coin.  It's a smidge longer as a result, has some complicated character stuff going on, and is shot in color, which is... very strange, honestly, for the type of movie it is.
But I also want to watch the movie with Jenifer or Tammy so they'll tell me what all of the San Francisco locations are.  This is VERY San Francisco.  You expect them to sit down and eat a bowl of Rice-a-Roni.
The story is pretty good, but the cast is pretty stellar.  Alan Ladd is an ex-cop released from prison for a manslaughter charge that he believes was a set-up.  He's been in San Quentin for five years, and despite his wife's desire to get back together, he's been refusing her while in prison and is still, for whatever reason, mad that she saw someone else while he ignored her for five years.*  The wife is played by Joanne Dru (Red River), and you're gonna think Ladd is a moron for ignoring her, especially when she performs as a songbird in a nightclub.
Since Ladd went away, things have changed around the pier and Amato has taken control - and, man, Edward G. Robinson is always the best, and he's... a real shitheel in this one.  I've seen the guy play sinners and saints, and he can do both with equal gusto, and he's back in racketeer mode here, playing a guy just consolidating his control over the fishing off the pier, who hasn't been afraid to get rough to do it.
I was delighted by a second-half appearance by Fay Wray, here in her mid-40's, playing a former movie star of the 1930's (natch) who has fallen for Robinson's right-hand man (Paul Stewart), who may be able to do the bad deeds, but maybe is also tired of it or not up for it as much as his boss.  Wray is, frankly, a star, and you can see it in her when she appears on screen.  It's a weirdly intangible quality, but she radiates presence, which is actually important to set up what comes late in the film.
This isn't as gritty as, say, 99 River Street, and it doesn't deliver a downbeat noirish finale - this is WB in Technicolor, we're getting a happy ending.  But I wasn't sure what to expect and wound up genuinely very into the movie once it was underway.  Mixing tales of vengeance and the moral depravity of this particular gangster, the movie has a lot of pivots, and even if Ladd's character is maybe a little flat (I blame the script, not Ladd), the rest of the movie jumps.
For fun, look for a very young Rod Taylor in a pivotal small part, and Jayne Mansfield in an uncredited bit where you see, she, too, is an unmissable presence on screen.
*I'm no master of romance, but when you have a good thing, maybe stay in touch with your SO while in the pokey
Posted by The League at 11/04/2021 03:49:00 PM

I haven’t seen this one! It’s not even on Reel SF.

That's kinda wild. There's definitely real street scenes and lots of rear projection. They start at San Quentin and head over the bridge in the first minutes of the film. Lots of shots back to the city from the water.