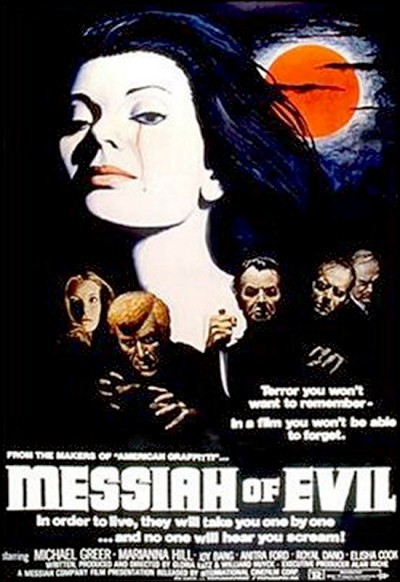 Watched:  10/31/2021
Format:  Elvira Special on Shudder
Viewing:  First
Decade:  1970's
Director:  Willard Huyck and Gloria Katz
A while back, JAL suggested we watch this film together, and I was "ok" and then things occurred and that didn't happen.  But as we were prepping to get together for a film, I noticed that this was the fourth entry in Elvira's 4 film 40th Anniversary celebration on Shudder.  I asked Justin, and he said "oh, yes.  Watch with Elvira."  And so I did.
Elvira seemed quite taken/ amused by the movie.  So that's a good sign in my book.  She broke into the film several times, not least because she was excited Elisha Cook Jr. was in the movie, and so say we all.  Anyway, if you've got Shudder, check out Messiah of Evil (1973) as part of her 4-film cycle.
This movie very much wants to be a horror film in a certain classic sense of horror - of creeping dread and mystery slowly overtaking our heroes as they succumb to madness, violence of others, etc...  Letters are read from people not in the story who are gone missing.  People wander languidly in a dream-like state.  Our narrator starts off confined to an insane asylum, warning us of doom before telling her tale.  It's that kind of film.
It's not *that* bad.  The pacing is a mess, as are a lot of low-budget horror films from this era that think they're building tension but they're... killing time.  But it has two legit actors pop up as guest stars (Royal Dano being the other), and had two - frankly- really good, creepy murder sequences that feel like an electric jolt in this otherwise plodding movie.
I don't think this movie is dumb, but it just feels like it's not quite sure what to do about its limitations.  And all of the actors seem like they're on Quaaludes.  So when you add zombie cultists into the mix...  and I have every reason to believe all of this was intentional.
The pair behind the movie, Huyck and Katz, went on to do work on good movies, including American Graffiti.  And bad movies (Howard the Duck).  It's one of the folks in famous-people film circles who didn't quite become famous themselves.
Anyway - check it out sometime!  And we can figure out why the main guy refuses to ever be seen without a vest on.
Posted by The League at 11/02/2021 01:09:00 AM