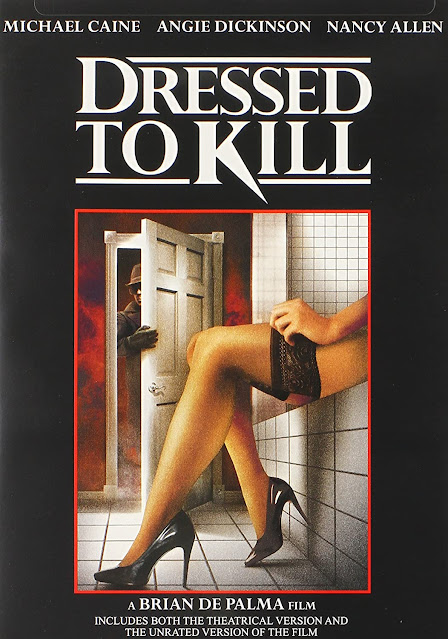 Watched:  01/22/2022
Format:  BluRay - Criterion
Viewing:  Unknown.  Probably third all the way through
Director:  Brian De Palma
It's very hard to say "I love Dressed to Kill (1980)" with a straight face, but I do think De Palma's pivot to a more explicit eroticism from the staid suggestion of such in the Hitchockian thriller is worth at least looking at.  At this point in his career, De Palma's movies read a lot like film school theory classes come to life, but I can't really remember our courses ever highlighting De Palma.  Maybe he's too on the nose with some of this stuff.  Maybe he wasn't "classic" enough.
But, yeah, what Hitch only hinted at, De Palma is pleased to put up on screen.  Your mileage may vary was to whether this works for you, but in an era where cinema was where adults went for entertainment, and with De Palma dealing neither with the Hayes Code nor Hitch's pre-War sense of decorum, just be aware the film is frank about illicit sex and sexual kinks, and there's no shortage of female nudity (that's an Angie Dickinson body double in those key shots there at the opening, btw).
In the middle of all this, Professor De Palma is lining up film scholars to take deep notes on his use of "the gaze", what people do and do not see, what we do and do not see as an audience, all of which he mucks about with using split focus, deep focus and some beautiful editing.   Just using those analog features, plus some curious processing of film to show the character's mind's eye is a nifty trick, but also placing Dickinson in a museum where people may observe, enjoy and not own objects meant for inspection is some sort of film school Yahtzee.
The movie is or was enjoyed equal parts for some excellent filmmaking and - I believe - drifted into camp appreciation for some of it's shocks. Dickinson finding her hook-up has just tested positive for an VENERAL DISEASE! is an excellent misdirection for where the film is headed, but in a movie that's foregone spoken dialog for minutes to shout at you in all caps is a heck of a move.
SPOILERS
I'm sure today's audience will tut-tut the now 42 year old film for it's regressive and dated take on trans persons, but I remember staring goggle-eyed at the end of Psycho that did the same "let's explain a crazy person badly" 34 years after that film's release.  And it seems maybe it was a misstep to cast the not-short and highly identifiable Michael Caine as "Bobbi", and never produce a visual red-herring in a movie about seeing and desiring.
I'm a Nancy Allen stan, and this movie and Blow Out helped solidify that idea in my mind and think of her as more than Office Lewis or a really problematic teen.   And I think she centers a film with a scene-chewing Dennis Franz, Keith Gordon being swiftly typecast as a virginal nerd, and Michael Caine in an iffy wig.  And, yes, there's no question De Palma was also like "look at Nancy!".  Which, okay, my man.
I like so much of the film, just dealing with the horrendous "trans folks can get violent!" bullshit at the end (part of which probably made it a camp favorite, tbh), and recently picked up the Criterion disc as Paul has assured me the extras are great, and I plan to watch them this weekend.
This is De Palma at his ascent, which would plateau at a very high level for a number of years.  He's an absolute freak with editing and use of the medium, and I salute him for it.  Yeah, it draws attention to itself as process, but I can't help but admire "how did this shot stay in focus on two planes?" and a lengthy museum seduction scene with no words and no clear shot of the seducer.  Just an overclocked guy that I assume could relate more to Keith Gordon's character than we should mention.
Posted by The League at 1/25/2022 11:24:00 AM