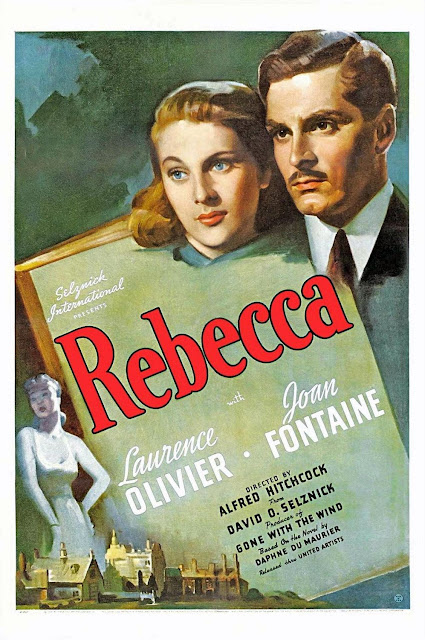 Watched:  08/02/2022
Format:  BluRay - Criterion
Viewing:  Unknown, probably 4th
Director:  Alfred Hitchcock
Way, way back around 1996, I fulfilled an English credit class at university by taking "The Gothic Imagination" along with a handful of pals, including my roommate.  The class was phenomenal, but the funniest part was that the instructor used the first lecture to explain we would not be reading vampire novels, and explained the Bronte sisters to the class, and by the second lecture, I'd say 1/3rd of the class had turned over.
Y'all need to read Wuthering Heights sometime, and Jane Eyre, because that shit sticks with you.
Anyway, at some point the instructor decided not to teach and just showed us Alfred Hitchcock's American debut, Rebecca (1940).  I was *hooked*.  I mean, I was in film school, anyway, and was doing that Hitchcock worship thing, but I remember being all in on the movie.
I'm currently reading Christina Lane's biography of film producer Joan Harrison, Phantom Lady: Hollywood Producer Joan Harrison, the Forgotten Woman behind Hitchcock. and had hit the section on Rebecca - which Harrison played a major role in securing for Hitchcock as he made his American directorial debut.  Recalling I had the BluRay in my possession, I popped it in.
Happily, I can report the movie is as good - or better - than I recall.
A young lady is travelling with a wealthy dowager as a paid companion when, in Monte Carlo, she stumbles across a seemingly haunted gentleman, whom her employer knows as a wealthy widower.  As her employer is laid-up sick, the young woman (Joan Fontaine) is courted by the gentleman (Olivier) and after some twists, they marry.
Returning to his family home/ amazing mansion, "Manderlay", Fontaine has a hard time adapting to being a "great lady", but her primary issue is that she's dealing with everyone's memory of the first Mrs. deWinter, including that of her (ahem) devoted servant, Mrs. Danvers.  Meanwhile, Maxim deWinter becomes more of a pill by the hour, his own home seeming to haunt him.  Our new Mrs. deWinter fights inner demons, the history around her and the facts around the death of Rebecca.
If you read your Jane Eyre, all of this will have a very similar vibe as a common English girl enters the world of mansions and finds love but it is @#$%ed sideways.
Look, no one is more covered in film conversations than Hitchcock.  And Rebecca gets no small amount of ink spilled.  Personally, I think it's an earned rep.  Hitch is firing on all cylinders, he's got the power of David O. Selznick's machine behind him, and a perfectly assembled cast.  The film delivers some incredibly chilling moments covertly and overtly (Mrs. Danvers encouraging our heroine to leap from the window is... something).
Frankly - I loved watching this movie again.  It had been so long, I'd mostly forgotten everything but the cast, some impressions and visuals, and the plot itself is an edge-of-your-seat affair for something that has no actual action, just discovery.  It's got some truly remarkable twists that manage no to feel false - no meam feat.
The movie is gorgeous, and a reminder of the beauty of black and white when you apply subtle gradations - the interiors of Manderlay elegant, spooky and overwhelming.  It's a haunted mansion in the best way possible, and rather than an expressionistic use of extreme shadow, the film is gauzy, like scrims are overlayed at times.
Anyway - it was phenomenal to revisit, especially in such pristine quality.  I'd only seen it on VHS previously.
Posted by The League at 8/04/2022 11:37:00 PM