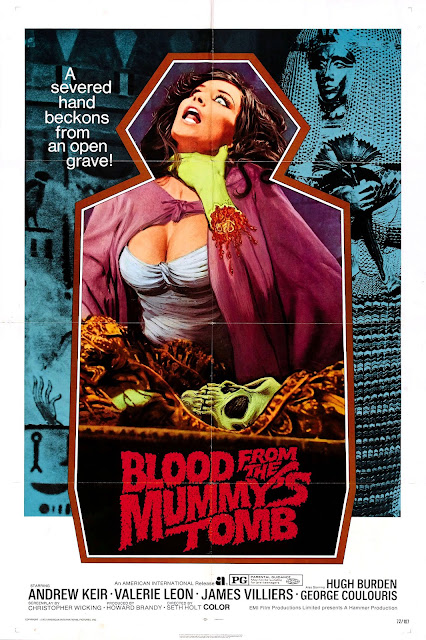 Watched:  10/26/2022
Format:  AFS Cinema
Viewing: First
Director:  Seth Holt/ Michael Carreras
Well.  This was 40 minutes of movie stretched out over 96 minutes.
I'll defend the last 30 or so minutes of Blood From the Mummy's Tomb (1971), but the first hour of the film is weirdly plodding for a Hammer, with long stretches of the movie that feel like filler to hit an unnecessarily long run time.  This whole thing could have been 70 minutes and lost nothing.
Example:  We see 85% of the moments leading up to an Egyptologist's demise and can infer he dies off-frame.  It's not great, but a workman-like scene.  We then then watch Our Hero look for the guy for what has to be a full 2 minutes of screen time, retracing the path we just saw just seconds before.  Look -  all we needed was Our Hero walking up on the dead body and showing his horror and revulsion.  That's like 10-15 seconds, easy-peasy.
So, yeah, it's a weird movie and falls in a lot of traps I usually associate with indie-schlocky levels of movie-making where there's pressure to reach a minimum runtime and no one working on the movie understands pacing or narrative economy.  This is a movie made by actual professionals from a real studio.  It's weird.  When you see the slow-moving dad, partially paralyzed from mummy-attack, realize his daughter on the 3rd floor is in danger and he rushes to help her from the basement, I let out an audible groan.  We're going to see a lot of awkward stair climbing.
What the film does have going for it is Valerie Leon, but YMMV here.  She's not an amazing actor, but she ably fills the role of Hammer lead.
Stylistically, the film has one foot in modern 1971 and another in pre-WWII movies of mummies and even archaeology.  But throws in odd bits like Our Hero's car is an MG TA from the 1930's, I believe, while keeping the wardrobe for the young leads hip and modern.
The plot, based upon a Bram Stoker horror novel with which I am unfamiliar, does inform how we wound up with so much reincarnation jazz in mummy films starting with Karloff.  On the very moment of discovery of a sarcophagus containing a perfectly preserved Egyptian queen/ priestess, an archaeologist's daughter is born and his wife dies in childbirth in London.  As she approaches her birthday (they never say which one...) it seems the daughter, who exactly resembles the "mummy", is becoming possessed by her.
The movie becomes a plodding "gotta catch 'em all" of the artifacts of the queen, scattered across London in the homes of the archaeologist's team - who don't stay in touch.  Why no one destroyed the artifacts is never stated.  Or why they didn't, like, put the in a vault or mail them to relatives or basically do anything to actually stop this... never comes up.
There's also a Dr. Pretorious-type imported from Bride of Frankenstein in James Villiers' Corbeck.  It's such an obvious swipe, it's kind of adorable.  And aside from Leon's wardrobe, the best part of the film.
I suspect Hammer probably knew this movie wasn't great, but they had also hired a down-on-his-luck Seth Holt to direct, and the guy died ON SET the last week of filming.  They soldiered on and made a movie, but - man.  This is not good.  It's not even "fine".  It's just mind-numbingly dull for vast stretches and it absolutely didn't have to be.  There's plenty to talk about vis-a-vis how it relates to modern mummy films, old mummy films, the Hammer canon, etc...  but I can't do it.
Posted by The League at 10/28/2022 10:49:00 AM