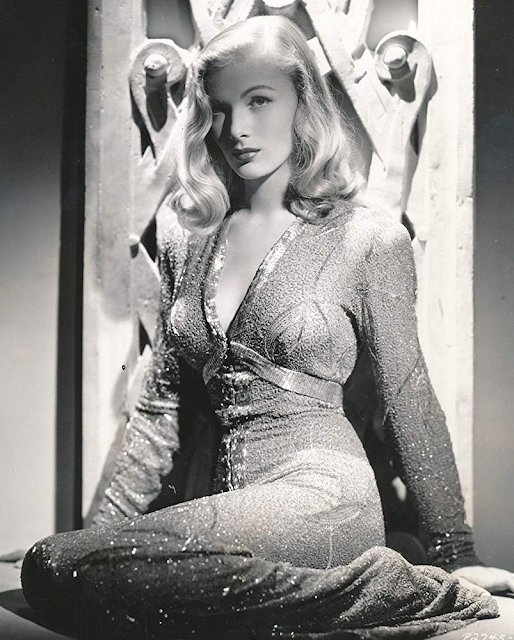 Today marks the 100th Birthday of Veronica Lake, actor, singer and performer.
Though her career in Hollywood was brief, and - by all accounts - something she was never all that interested in, Lake starred in and helped make a handful of films that are considered among the canon of Hollywood classics, including Sullivan's Travels, I Married a Witch, This Gun for Hire, The Blue Dahlia, The Glass Key and others.
It's highly likely that even if you never saw any of those movies, you've seen Veronica Lake's picture included in some constellation of 1940's-era Hollywood stars or mentioned here or there.  Or recall that Kim Basinger was supposed to resemble her closely in the film LA Confidential (ymmv whether this is accurate).  You may only know the swooping blonde wave that was her trademark, partially obscuring her face, which has become a curious and continuing symbol of sexiness that's endured well past Lake as household name.  I mean, of the Voltron-like assemblage of 1940's sex and glam ideas that informed Jessica Rabbit, that swoop was there.
In the films in which I've seen Lake (all of those lifted above) you immediately understand how she became a star.  Physically, she's the combination of beautiful and striking that the camera tends to love and, the moment they enter the frame, you know something about the character.  There's not really a thread for you to say "oh, that's a real Veronica Lake-type role", but the sly smarts she brings to each character, and wise-to-the-world knowingness works exceedingly well in her noir appearances.  In the two comedies, she's absolutely game for some heavy lifting to get the job done.
For a brief time, Lake was very popular.  So much so that the government asked her to change her hairstyle to encourage young women to follow suit as - and as far as I know this is true - they were getting their hair caught in the machinery they were now working as part of the WWII industrial machine. 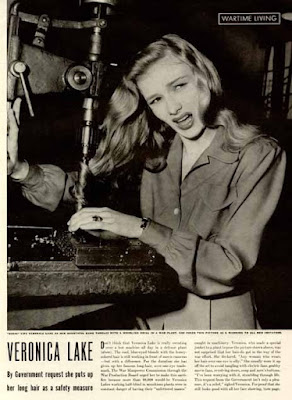 Lake's life was deeply complicated by virtue of a controlling mother and the studio trying to run her life.  The best way to hear about it is via the You Must Remember This episode on the the topic.  After leaving Hollywood, she disappeared into obscurity only to be re-discovered by an intrepid reporter who found her working as a cocktail waitress.  Following this, she did see an uptick in public sentiment and was promoting her memoirs when she was diagnosed with issues stemming from her years of alcoholism and passed in 1973, at about 51 years of age.
Some talent want the Hollywood life and stardom, some want to work as much and hard as they can, and some wind up in front of the camera seemingly by mistake and indifferent to the whole affair.  And all of them can be amazing on screen, and all of them can vanish on different timelines and a variety of reasons.  I don't think there's any particular motivation or background that matters much once the klieg lights are thrown on and the camera is in focus.  In the case of Lake, everyone but her may have wanted to see her on screen.  But once there, she had the charisma to make up for anything she lacked in theatrical training and the natural energy that the audiences adored.
Anyway, we'll be watching one of her first big roles on Friday with The Gun For Hire, her first of several pairings with Alan Ladd, and a great crime film.
Posted by The League at 11/14/2022 10:33:00 AM