So, Nathaniel asked me why I forgot to mention the giant, hallucinatory bees in 1978's The Swarm.   And, he's right to ask, because it's probably the most stunning/ least magical visual special effect in the movie.

What's most interesting is that the bees inject a venom into their victim that make them not just hallucinate, but hallucinate a very large bee.

Now, as a kid I saw an ad for The Swarm on TV as the Late Late Movie on local UHF, and they kept showing the clips of the hallucinations.  Unfortunately, at age 11 or so, I was not qualified to stay up for the midnight to four AM shift, so I missed the broadcast and never saw the movie I assumed was all about giant bees.  At some point when SimonUK suggested we watch this movie, like, two years ago, I eagerly said "you mean the movie about the giant bees?"
"No, the one with Michael Caine."
"Right!  With giant bees!"
"Well... no." 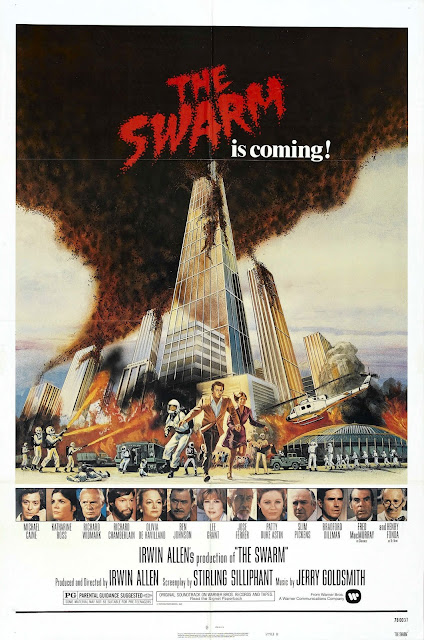