Rick Geary and Murder Most Foul Makes for Good Comics!

So let’s discuss some comics, shall we?

In addition to super-heroics, last year I picked up Rick Geary’s “The Lindbergh Child” from NBM’s ComicsLit imprint. Outside of a few pop-culture references and a barely remembered Wikipedia reference I’d one done, I knew very little about the actual Lindbergh case.

For the past few years, cartoonist Rick Geary has devoted a bulk of his work to the creation of non-fiction accounts of very real life murder. Wacky fun, I know, but Geary's skillful storytelling makes for some great comics. 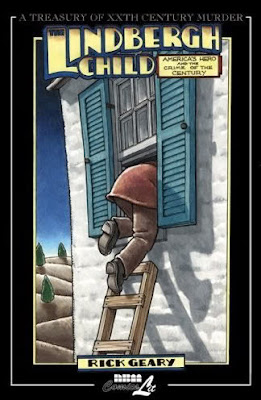 The murders, while infamous, are not romanticized, and the details around the case are relayed in much the same manner as classic Dragnet “just the facts”, rather than any sort of case-building-by-way-of-historical-fiction, that it’s not hard to imagine most other creators might pursue in order to convey the story. Geary knows that the facts stand on their own; and while it’s almost unavoidable that he might focus on certain specifics he finds engaging, he lets the reader’s inference draw the horror of the murder scenes between text and his well chosen images. That said, Geary's dry delivery isn't without snarky observation or a bit of well-phrased sarcasm.

Because Geary relies upon well documented, true-life crimes, which occurred during the 19th and early 20th Century (many fall under the banner of "A Treasury of Victorian Murder"), the stories often come to confounding and messy conclusions which are hard to imagine in the age where a simple telephone call and running a driver’s license could be enough to corner a suspect. The stories are filled in as much as possible in these regards, including theories, false leads, and fates of major players.

The cartooning style (and it is cartooning, mixed with fantastic bits of illustration when it comes to important details, such as the blueprint of, say, Lizzy Borden’s house), may take some getting used to for the uninitiated. However, the exagerated cartooning enables Geary to draw distinct and representative characters for each person involved, with tremendous expressive quality. 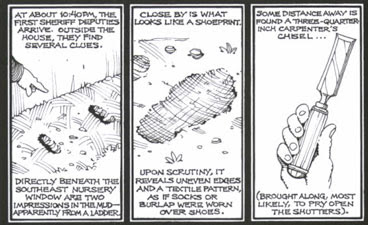 Of the books I've read so far, the tales where I knew little to nothing have been most rewarding. "The Beast of Chicago" and the aforementioned "The Lindbergh Child" kept me up for hours after reading them, following up with additional web research, as the stories were so incredible, but completely true. ("The Beast of Chicago" was particularly fascinating as I knew literally nothing of the case until page 1.)

NBM Publishing has placed several pages of "The Beast of Chicago" on Google Books for review. Take a look! 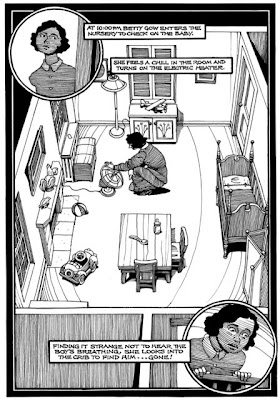 From "The Lindbergh Child"

Geary has done several of these books, and I'm still picking them up here and there. Many will be available at your local comic shop. You can also find them online, including at the NBM site.

These comics are definitely the sort of thing I'd put in the hands of someone looking for a good read, comics or otherwise. With summer coming, feel free to swing on by and borrow one from The Signal Watch Library.
Posted by The League at 5/05/2010 12:03:00 AM

Oh man, my local library has a bunch of these, and I've been tearing through them.

Lindbergh is great, but "The Saga of the Bloody Benders" is my fave so far. Maybe because it's a case I'd never heard of, and it's horror-movie level brutal and weird.

I really enjoyed The Saga of the Bloody Benders. It was completely creepy, and I think that in the right hands, you're right, it would make a terrific movie. It was another one that had me digging up websites and looking for photos afterward.

I highlighted "The Lindbergh Child" and "The Beast of Chicago" because both had so many details, including layouts, etc... in the book. But I'd definitely recommend The Bloody Benders.

Oh, Horus. People who read Superman also know how to read big boy books, too. I'm reading "It Was the War of the Trenches" right now, so expect a Tardi mention at some point.

Never circled back to Huizenga. I guess he's wrapped up with Kramers Ergot?

Non super-comics weren't much of a fixture at LoM, but I'm floating stuff like the Geary mention to see how it goes.

Huizenga's great work right now is his ongoing Fantagraphics series "Ganges", although he also continues to self-publish minicomics. I'm convinced he'll go down in history as one of the great gen Y comics realists.

Don't get me wrong, I'm a superhero fan myself (though I lean more toward Bats than Sups), but I'd like to see more cross-pollination between the genre that made comics famous and the stuff being done on the cutting edge of the technical / expressive side of comics.

Looking forward to seeing future posts along these lines!

Right! Ganges has been getting some good press from folks I trust. Generally I wait for collections on stuff from Fantagraphics, but I'll take a look next time I'm there.

I, too, wish that the bar were raised for superheroics. With the low overhead for trying new things, I don't know why DC and Marvel don't have a line within their line for exactly what you're talking about.

I also keep looking at the new crop of writers, and the best I'm seeing are guys who are very good at crisp and clean standard superheroic narratives. And too much praise when these guys write a comic with a boob in it to make it "edgy".

And I'm really disappointed at how much "let's recycle genre tropes" stuff people are doing in their indie work. It seems like such a waste.

Here're some (rather extreme) examples of the kind of cross-pollination I'm talking about: