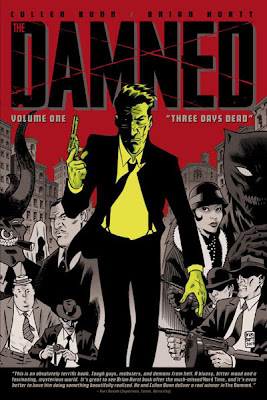 On Free Comic Book Day this year, I was fortunate enough to interview and then meet the creators of The Sixth Gun from Oni Press. At that time I picked up their previous effort from Oni, The Damned Vol. 1. I do want to acknowledge the generosity of writer Cullen Bunn and artist Brian Hurtt in previously submitting to an interview.

The Damned takes place is a world where the demons of the underworld (horned, bestial, but mostly roughly humanoid) are alive and well and have integrated seamlessly into the criminal underworld of a Prohibition-era America. Crime bosses tend to have ram-like horns and sign deals in blood. The narrative leaves it unclear in this volume exactly how long demons have been up to no good in the mortal world, or exactly how much John Q. Public knows about who, exactly, is running rackets in their city as "mortals" are seamlessly integrated into the mob. It's an open question, but the treatment of the topic is so matter-of-fact, exploring those issues was obviously planned to be left to later stories.

Our protagonist, a more-or-less-mortal named "Eddie" employs a unique talent, acquired when Eddie sold his soul for some favor and became cursed. He can be killed, and die, but the instant someone touches him, they take on his latest wound. Death has become an inconvenience for Eddie, and occasionally a useful tool in his profession. Hired by a mob boss to track down a missing demon in town to negotiate a deal between two gangs, Eddie stumbles onto a bit of a mystery that could result in the eruption of gang war.

Fans of The Coen Brothers film, Miller's Crossing, or readers of the works of Dashiell Hammett, will very quickly begin to recognize the style employed by Bunn, in structure, dialog and the types of characters that dominate the story. It's a risky choice to reflect works as beloved as Continental Op stories, or a film as well known as Miller's Crossing. Fortunately, Bunn's narrative doesn't simply follow the beats of better-known works, especially as the mix of plots includes a supernatural bent, and a distinctly supernatural B-plot you aren't going to find in a Hammett novel.

The tale isn't quite as overly complicated as, say, Red Harvest or The Dain Curse. It would be interesting to see Bunn flex his muscles and see how close he could get, but in comics there's always a page-count per-issue to worry about, as well as how many issues the publisher is willing to support. In the pages he's got, and with all of the balls that Bunn is juggling in the story, with multiple plots, characters and their relationships to detail, I think he does pretty darn well.

The dialog follows the snappy patter of the genre, including homage to the tough guy slang in other works, and I do like most of the characters, given the amount of time most have to establish themselves. Eddie is a bit of an open book, and its clear Bunn intended for his story to unravel in subsequent volumes. Like many crime-novel protagonists, he's an insider, and its hard not to like Eddie's cynical, world-weary (even in a world with horned mob bosses) acceptance of his lot, but, of course, Eddie's got a past and something of a heart, and those things don't usually help characters in stories like these.

As a guy who likes to doodle, I can't really say how much I envy Brain Hurtt's style. While I have no doubt his work is slightly more detailed in The Sixth Gun, I continue to be wowed by his ability to stay on model with characters that skew cartoony (in comparison to, say, an Ivan Reis) while using the looseness of the style to articulate more with his characters than 90% of the heroic posing of DC's B-list hero books. I'm just a big fan of this guy, and need to re-crack my Queen & Country collections as he was responsible for art chores on some rotations through the series.

As a fan of the crime/ gangster genre, and someone known to read a fair amount of fantasy work, I found the book a fun read. While enough of a puzzle to keep it interesting, the story never feels bogged down by what could have been lots of exposition or set-up. The world Bunn and Hurtt create is an enticing one, and one that seems could carry on for a few more tales. The story seems to be arching its way toward a series by the conclusion of the first collection, and with or without Eddie along, its not too hard to imagine how Bunn and Hurtt could expand on the premise.

While they're currently set to work on The Sixth Gun, one must assume that a trade of the second run of The Damned comics is coming, which I look forward to picking up.

In the meantime, I recommend hitting your local comics shop to check out Bunn and Hurtt's comic for yourself.
Posted by The League at 6/02/2010 12:03:00 AM

I've actually yet to read this. I've only got the first issue, which I picked up at a shop while on an out of town trip. Wouldn't have looked for it or bought it without having read your previous interview with the creators. Unfortunately, I can't read this post until I've read the comic!