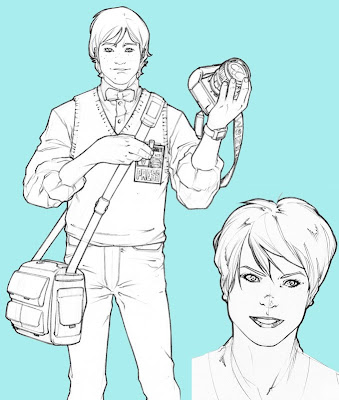 In its 9 seasons on the air, the Superman-before-he-was-Superman TV program Smallville has done much more to borrow from the comics than its created new or given back. But the addition of Chloe Sullivan to the series has been a welcome one. Played by Allison Mack, Chloe has filled many roles, from a sort of proto-Lois Lane, to unrequited admirer of Clark Kent, to information hub/ proto-Oracle of the JLA. Mack has had to literally grow up on the show, and has become one of the more capable actors on the program, even if she's been given some iffy character and plot points the past few seasons. You kind of have to hope she finds more work after this most recent season. 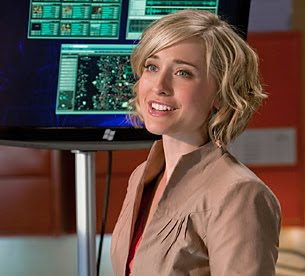 Chloe is Super-Tech Support for the JLA

A few years ago DC Comics announced Chloe would be making her way into the actual print comics, where she has never appeared (outside of a special Smallville comic or two). Looks like that's finally happening.

The gameplan then was to bring her on as a junior reporter of some sort. On the show, she's also Lois's cousin, so that may be happening again here. I'd certainly expect the journalist angle rather than the JLA help desk support angle.
Posted by The League at 7/25/2010 12:48:00 AM

"Dammit Superman, how many times have I told you that writing your password on a post-it and putting it UNDER your keyboard is a great way to get hacked! Everyone knows Manhunter loves to log into your AD account and send out emails to everyone in the Workgroup saying "I'm a pretty layyyy-deeee." Next time think security first, or else I'm totally never going to fix your cute kitten background on this crap-ass Packard-Bell ever again!"

I was happy to hear this since Chloe is my favorite Smallville character. I knew DC had purchased the character a while back and was wondering if they'd ever actually use her. Awesome!

Only Batman would be able to strategize enough to come up with an unhackable password. He's three steps ahead all the time, by replacing the letter "o" with a zero in "passw0rd".

So does this mean that Chloe knows back from back in Smallville?

Oh, that was me up above.

I am afraid I missed the reference. "Back from back"?

Whoops, sorry. I was asking if it means that Chloe will know Clark back from Smallville? I'm not clear if the comics Chloe is going to have the same background as the TV Chloe.

I suspect this will be Chloe in name only (sorry, Jamie). I'm guessing: Lois Lane relative (like the show), who is a perky, wanna-be reporter (like the show in early days), who is a bit of a snoop. We'll see.