I Heart All Star Superman

I recently got my hands on a copy of the Absolute Edition of DC's All Star Superman.

Man, I love this comic.

Written by Grant Morrison, drawn by Frank Quitely and inked & colored by Jamie Grant (all from Scotland, btw), this book sums up so much of what I love about Superman comics.  To see it in DC's deluxe Absolute format, with the pages blown up to almost the size of the original art, and to really soak in Grant's exquisite colors...  its just a huge pleasure to see story, art, form and function come together. 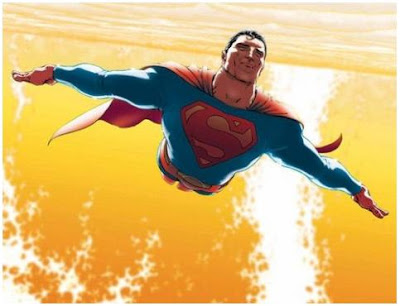 If you come to the book skeptical of Superman, there's nothing here to convince you away from your opinion.  But if you do like what's in the book, the important thing to know is that this isn't some wild departure Morrison has envisioned.  He's seamlessly echoing the types of stories you could read from the 50's - mid 80's (before the Byrne/ Wolfman "everyman" reinvention that also works, just differently), and adding very Morrison-ish bits that, on reflection, aren't so different from the wild stories that spawned Superman walking around with a lion's head, Bizarro, as king of the ant aliens, etc...  Morrison even has down Silver-Age Superman's always-understated way of dealing with the uncanny and bizarre.

The plot is basically this:  Superman learns that a recent trip to the sun is leading to his death.  And the events that lead up to his last moments. 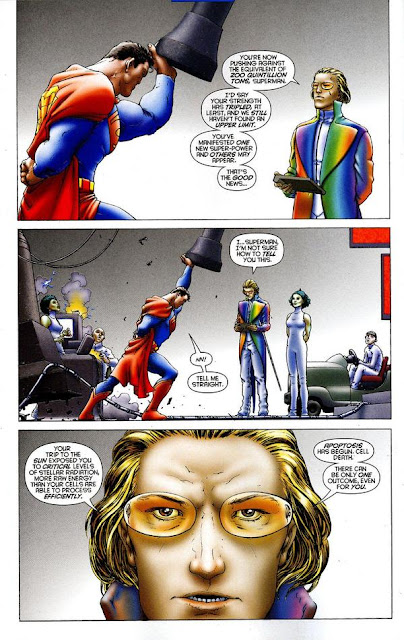 I often actually wonder if modern readers who picked up the series understood what Morrison was doing.  I suspect most didn't get the careful blend of new and old, the asides (like Lois wondering if Superman was playing yet another massively elaborate prank on her), characters like Samson and Atlas showing up to woo Lois...  and all done with a mostly straight face.

A lot of people ask "who is the mask?  Superman or Clark?" And we know the 1980's told us Superman was just an outfit a farmboy from Kansas put on, but we also know that prior to 1985, this wasn't so much the case.  It was Superman in a disguise, an alien wanting to be human, to fit in and have friends in a way that nobody would question if he were green and had antennas as "the alien".

Like all outsiders, Superman is an observer and does comment upon us.  But when he's himself, and is confident in his Superman-ness (and not given to plodding, heaped upon "flaws" and "insecurities") its not that he's too perfect, its that he can be... alien.  "Yes, I will fly into the corona of the sun and save the space crew" is something Superman and no other character can say, and there's something amazing about that certainty when you see it done up right.  But at that point, you kind of have to forget about Superman as a man, or as a character one relates to, and look at him as something else entirely. 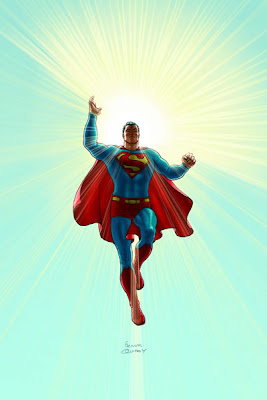 Clark isn't, as Tarantino would suggest, what Superman thinks of us.  But as Clark he does appear so very human, and in Quitely's depiction, its the best argument for how nobody would ever guess, that we can see the value of the Kent identity, all the more shocking when its stripped away to reveal the "S" beneath.  And, of course, Morrison and Quitely work in site gag after sight gag as "Clark" saves people without them noticing, and shouting at Clark for his oafishness.  Its a brilliant little addition from the spirit of the Donner movies more than the comics.

This book doesn't address the question of "can you relate?", which I find a loaded question.  But the characterization returns to form with the stoicism of the 1950's and 60's (and which Reeves and Routh portray in the movies), and I actually quite like that granite stillness in the face of chaos.

Which is why Morrison's Lex, and his monologuing in episode 5, "The Gospel According to Lex", flips the tables and is so compelling (and why Lex becomes increasingly fascinating for adult readers, leading to his role as the featured character in the current run of Action Comics).  What's more compelling to the reader once labels of "good guy" and "bad guy" are stripped away?  The self-made genius billionaire with endless ambition, or the alien with the true moral compass and bullet-proof skin?

In many ways, to me, and I realize this is only me...  If I'm looking for someone to observe through, its the alien who is watching and trying to help, not the unbridled ambition blaming some outside force for his failures.  At the end of issue 5, Superman/ Clark breaks and pleas with Lex for sanity, and is dismissed (the story also suggests Lex likes Clark, which is...  interesting).  Lex could have been so much more (Superman is, after all, good friends with Batman).

I haven't finished re-reading the book, but it did strike me how much the success of All Star Superman paved the way for today's post-Infinite Crisis continuity interpretation of the character.  Lex as both mad scientist and billionaire, the return of the whimsy and "anything goes" attitude of the books, reintegration of the Legion...  all these things.

And, of course, Morrison gives us a Lois that a Superman, an alien who can see his own cellular mitosis and burn holes in mountains by peering at them, can love.  Its up there with Kidder and Neil as live action Lois, with Waid's firebrand Lois...

The book is out as two paperbacks, and I can't really recommend them enough.

Now that DC sounds like they're wrapping up Superman's cross-country trek a bit early (or differently), and the New Krypton story is done, maybe its time to return to Metropolis and take a page directly from Morrison.  Its hard not to believe Paul Cornell, handling Lex in Action, isn't already headed this direction.
Posted by The League at 12/04/2010 12:56:00 PM

I have never been a huge fan of Superman mostly because I don't think there is much drama for a man who is basically a stand in for god. That doesn't mean I don't think the character can be great. See my guest post. However, with All Star Superman Morrison completely flips this on it's ear and we see that Superman/Clark is all too human from issue #1.

If you've been reading Superman since the 40's you are going to get a lot out of this series but if you've never read Superman before you are still going to get an incredible story. I really think all levels of readers are going to love this book.

I own this 12 issue series in the two 6 issue hard covers and if it is the best Superman story of all time it is probably number the second. The only other thing I've read that is comparable is Moore's What Ever Happened to the Man of Tomorrow storyline.

I find the "all too human" comment interesting. As I mentioned in my post, this version strays from the "human" element that Byrne and Wolfman added to the character and I went ahead and described it as "alien" in that I do think this sort of characterization is "alien" to many readers.

Superman's reaction to learning he's experiencing cell death is a sort of belabored look and a statement about "how ironic that the source of my powers is now the thing that will kill me".

There has always been an undercurrent of that stoic, still waters-run-deep element to the character. Its why I don't think things like Superman walking across the country are that crazy and certainly not out of character. The character simply reacts... differently. Its not about gnashing of teeth and fits of rage, and I'm often disappointed that that's what so often passes as "flawed" or "human" or whatever issue element Superman is said to lack by the comic-razzi. Godlike or alien or whatever... the fundamental issues of confused love, of self-doubt, of loneliness, of failure (see Kandor) are all right there. Morrison and Quitely got it and put it on the page writ large.

I guess by saying that he is "all too human" he is aware of his mortality and so are the readers in a way that has never been expressed better in my honest opinion. Then Superman spends a good amount of time over the next 11 issues making sure all of his friends will be taken care of.

It's interesting, because Superman HAD a lot of that feeling back in the Silver Age. Between imaginary stories where he actually died and you saw what measures he'd put in place, the constant references to Krypton's demise, the more frequent appearances of Kryptonite, etc... despite the fact that Superman was at his world-juggling-most-powerful in these stories, I think it informs what Morrison was up to.

I think I agree with everything you're saying. "All Star" is likely the best Superman story of the past few decades and one of the best to see print, full stop.

Yeah most of my Superman reading has been done in the post Byrne era with a smattering of pre COIE stuff as well. Based upon your love of the Silver Age stories I'm thinking that I need to track down some more of those stories.