I'm Headed for Waco, also (Some) Lawyers are Pigs!

I'm headed out for Waco yet again tomorrow.  No, I will not go to your old local haunts, JimD.  Its another night at Ninfa's for me!

I'd feel worse about the fact that I'm not going to do a real post, but I interrupted my hiatus to talk about Wonder Woman on TV and the Comics Code thing.  See:  news breaks, we're on the scene!

This evening I was driving south on Lamar in Austin, and at the intersection of Barton Springs and Lamar, I saw this: 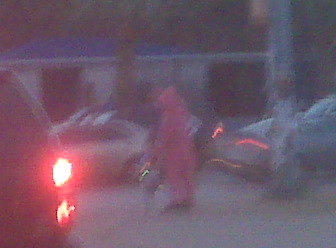 It was a gentleman of middling years in a pig costume standing at the intersection and cheerfully waving.

And then he turned and I saw his sign:

Can't read the sign?  Well, let me help you out.

Apparently the pig costume is nothing new.  Austin gadfly John Kelso wrote a column on the Lawyer-hating pig-guy way back in November.  I'd just not had the chance to see him.

Kelso never did learn what was going on, exactly, and it sounds like the world may never know.  I just like the idea of dressing up as a pig to make an abstract point.  Especially when you dress up as one of the two things you're comparing and suggesting you like neither.  That's owning it, man.

But, I wonder if the pig suit is getting attention as pigs can be terribly cute animals.


Anyway, I knew I was in luck when I went to Google "Lawyers are Pigs" and "Lawyers are Pigs Austin" came up as an option.  I salute this fellow, even if the lawyers I know are mostly okay.

Email ThisBlogThis!Share to TwitterShare to FacebookShare to Pinterest
Labels: Austin

I've actually talked to the pig suit guy because he likes to loiter outside out courthouse and... well, because I'd rather try to get the life story of a guy in a pig suit than do an honest day's work. He was friendly but surprisingly tight lipped about why some lawyers are pigs (it's easier to make a statement, I guess, when you don't feel compelled to explain why you're making it), but the rumor around the courthouse is that he thinks he got screwed on his attorney's fees on some kind of civil case.
Anyway, he's been around for a long time now, and I appreciate him adding the "some" disclaimer to his sign. Really classes up the whole "crazy guy in a pig suit with a sort of noncontroversial message" schtick.
So crazy pig suit guy- shine on, you crazy diamond!

Yeah, I mean... how can you NOT like this guy. He's not being unreasonable, what with the whole "Some" clause to his statement. And who doesn't like somebody in a pig suit?*

Anyhow, I fully support this guy in his quixotic quest to make the public aware that a few lawyers out there are bad apples.

Wait... I might be getting an idea for a costume of my own...

*recent issues of Batman & Robin aside.