I was surprised by how down I got when hearing about the untimely passing of Dwayne McDuffie.

As I said, I haven't read all that much of McDuffie's work, but I did like what I did read (I wish he could have gone on forever once they handed him Firestorm).  And somehow many of us who were fans of the Justice League Unlimited TV show knew that McDuffie's hand with the show as writer, producer, etc... I wasn't really into superhero comics during the period when the Milestone titles hit the shelf the first time, but I absolutely remember looking at the books on the shelf when they debuted and thinking "well, obviously.  Good." 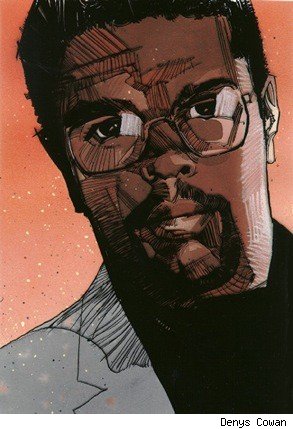 McDuffie's passing as Static gets his own title within the DCU proper is, in some ways, a painful reminder that DC once again took too much time, even after acquiring the Milestone characters, to deal with valuable properties that gave the DCU a more diverse representation and, of course, were actually pretty good ideas.  He should have been here to see DC make something of the promise of Milestone.

Its also a tragedy that All Star Superman was released on Tuesday, with McDuffie passing before seeing it released.  While only Morrison could have written the original series, those of use who follow these things knew McDuffie may have been the only person who could have brought the series to the moving picture and done it justice.

Between Egypt, Libya, Bahrain, Yemen and whichever other places flaring up...  things are getting a little creepy working for the State of Texas and we're kind of watching the yahoos in the Capitol and hoping providence leads to solutions rather than posturing...  add in Wisconsin, the tragedy in Christchurch....  it all just feels like a lot.  And only the passing of a writer I like (heck, a writer I respect) maybe that's on a scale I can understand.

Just one more thing, you know?

There are now posts out there about how we need to respect creators now and let creators know we love them now.  Fair enough.  I agree.   The internet, this site included, too often goes for the low-hanging fruit and spends its time finding ways to complain about creators (loudly).

What I'm kind of curious to know:  is this what it takes for the major publishers to realize what they squandered?  Or, more likely, what could have been had DC spent more time looking to McDuffie for answers instead of insisting on whatever editorial mandates came from top down in just the last few years?  Is this a discussion happening at all in the industry?

Weren't fans initially happy to hear about characters like Static making their way to the DCU from Milestone's walled-off world?  Weren't we all a little giddy when we heard the same Dwayne McDuffie who steered the JLU ship to greatness was coming to DC to write JLA?  And even inbetween all the mucking about with the JLA, weren't those issues still something pretty impressive, with a bold and exciting new cast sliding into place?  And what would have happened had they simply treated McDuffie with the same gravitas afforded other writers, and, frankly, often far lesser talents?

Maybe the comic money didn't matter to McDuffie.  After all, I have to assume the work on shows like Ben-10 and others had to have been a decent living wage.  But who can doubt that he loved those characters, and wouldn't have wanted to do right by them on the page?

Obviously I have no idea what DC's policies were toward McDuffie, character management during Batman RIP, New Krypton, etc...  but I can also guess, given how things shook out.

What makes me wonder is:  how is that good editorial policy?  How does it help to paint a writer and creator like McDuffie into a corner?  And who at DC or Marvel (or any company with a shared universe) is dealing with that situation even now?   And who knows what could have been...

Its an odd way to commemorate a writer, by wondering what else could have been, or perhaps that's exactly the point when someone goes too early.  But I don't think it should go unnoticed by DC that its not just an artifact of social media - your audience is universally mourning the loss of someone they liked, they admired and who told stories they loved and would have told more.

Its not a secret that something seems a bit broken at Marvel and DC these days in how they've worked with creators and who they've chosen to work with.  I just wish it were not the unfortunate passing of someone who should have had decades ahead of him to shed light on how the creators that make the stories are appreciated by the people who read them, and when they've earned that trust that its the job of editorial not to direct but to steward and support.
Posted by The League at 2/23/2011 10:27:00 PM