Tura Satana Merges with the Infinite

Ah, man.  According to Roger Ebert, Tura Satana, star of Russ Meyer's Faster, Pussycat! Kill! Kill! has passed.  Satana was apparently every bit the hot headed hellion as her character in the movie, but she's famous mostly for two big things:

A)  Her outsized attitude
B)  Her unwillingness to compromise

I don't know if you've ever seen Faster, Pussycat!, but its the crazy pulp books of the time brought to life on a budget and a vision.  A very particular vision we can all thank Russ Meyers for bringing to world.

And just as the dime store novels it emulates, Faster, Pussycat! is actually more interesting than you'd think, for any number of reasons that go well beyond the story and brazen storytelling.  I've only seen it once, but I can only imagine that when this movie hit the silver screen, it must have been pretty damn interesting.  Not least because of the contributions of Ms. Satana. 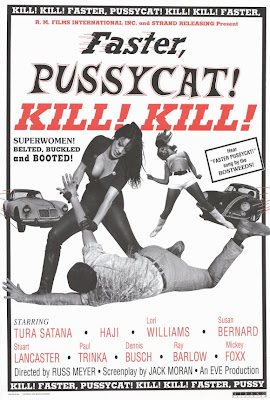 Ms. Satana has already found her place in the pantheon of women more famous than their roles or any single work they did, becoming a sort of icon appreciated by both men and women.  She's not entirely unlike Betty Page, Louise Brooks and others in this regard.

Yeah, if you haven't seen that movie, folks, go see that movie. This is really sad news, Tura was an icon, and the Betty Page comparison is very apt.