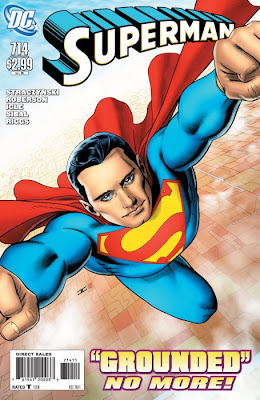 With this issue, Superman will end a 72 year run. Sure, it went for a long stretch where the powers that be renamed the title The Adventures of Superman, but we all knew what the score was. Issue 714 isn't just the end of the much-discussed Grounded storyline, its also the conclusion of one of the oldest, continually published periodicals in American history. Really, Superman has been on the stands for just under a third of the lifespan of the US.

The Grounded storyline took a lot of guff when it launched under Straczynski, and it struggled to meet scheduling deadlines, eventually seeing two fill-in issues by Willow G. Wilson and then the entire story was handed over to rising star Chris Roberson. And, frankly, Roberson's intervention didn't just turn the ship around a bit and keep it on course, he managed to prove that there are no bad ideas, just weak execution and turned Grounded into one of the best Superman reads the monthly comics have enjoyed of the past decade.

Of the folks who've been writing for the character of Superman the past decade, there have been four or five who seemed to truly understand the character. Morrison, Waid, occasionally Johns, and I'd say Roberson did what I thought might be impossible for DC at this point, and that's bring a writer onto the book who didn't have a sort of abstract appreciation for Superman, but a solid, foundational understanding of Superman unspoiled by more than two decades of the repetitive message of Superman's irrelevance and DC's odd scrambles to keep him in the spotlight.

In a lot of ways, the books suffered not from anything Roberson (or even JMS) did, but from reader impatience and the fanboy internet culture that refuses to read their comics with anything resembling patience for story and nuance, and the fact that many readers' picture of Superman begins and ends with the caricature of Superman that they keep in their mental rolodex rather than any actual knowledge. Roberson's commitment to what he knew worked about The Man of Steel, in the end, was what carried the storyline, allowing him to understand how you could take Superman from the state in which he'd inherited the character and do what Superman does (and what we can take away) - come back better and stronger.  It was this deep understanding of Superman that we see so infrequently in the books that the second part of Grounded delivered why I was a little broken up when I closed the cover on this issue and said good-bye to Chris Roberson on Superman (for now).

I believe Superman works best when you think of the powers and abilities Kal-El carries as almost metaphorical rather than something you'd bother to calculate or keep stats on.  When Superman seems to break past the seeming limits of what we "know", we have to ask why from a story or character perspective we're pushing the limits rather than believing the writer has failed.   But sometimes... you know, Morrison certainly seems to understand this quality in Superman storytelling, from sending Superman to go "fix the sun" in All Star to singing the song in the key of life to save the universe in Final Crisis.  And similarly, Roberson builds a seeming standard villainous threat with Lisa Jennings, only to reveal that they've been locked in an odd battle of Superman's personal emotions. Roberson lets Superman, in what is now his final appearance in this volume of Superman, win not by force or superior tactics or whatever we might see in any other superhero comic on the shelf, but with pure hope. And that, for me, was one of the most gratifying endings to a Superman story I could have read.

Since the announcement of the DC New 52 re-launch, I've bemoaned the fact that Roberson wasn't included in the Superman team, and I can only hope that DC reconsiders their position a bit down the line. In the final pages of this issue, there's so much potential and possibility, its a bittersweet read to see what brilliance Roberson was primed to take to the title that we'll never get to see come to life (at least in current continuity).

But what we did get was a resonant ending to the epic journey both within the pages and outside the pages of the book, sealing up plot lines (including a terrific suprise reveal) and the emotional arcs of Superman, what this story was always about, brought to a remarkably satisfactory conclusion.

I particularly enjoyed the story-telling transition used, taking us out of the action of Superman and Lois reconciling and bringing us back to the Fortress of Solidarity and a "and what happened then?" moment with the recruits hearing the tale, pushing us back out and around the world of Superman and giving us a happy ending to this version of Superman that we can carry with us.

Often I might criticize an editorial team or issue for swapping out artists, but I understand this issue may have had particular time constraints.  But, mostly, I've been following Jamal Igle for years, and it was a very special treat to see him join Roberson for Superman's send-off.

I'd like to believe that we're on a cultural upswing once again with Superman, and in part thanks to a new generation of readers coming to comics without the burden of the gritty 80's and 90's hanging over their heads they felt leant legitimacy to their reading comics as adult-oriented material, but also because we're finding writers who understand the value of hope, and things like Truth, Justice and the American Way, and aren't afraid to own those things when it comes to The Man of Steel. 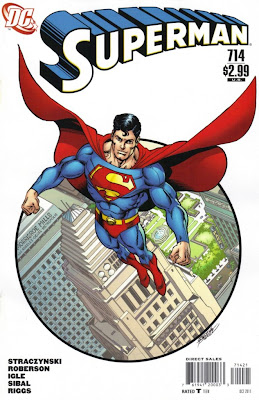 Congratulations to Chris Roberson and his wise/entertaining wife, Allison, who weathered the storm of Grounded, and accomplished what could have been one of Superman's impossible tasks in making this story one of my favorites.  I'll be following Mr. Roberson onto Elric, continuing with iZombie, and I am delighted to be reading his Stan Lee's Starborn series from Boom!.  And, of course, Roberson will be starting a new series called Memorial and taking on the challange of a Star Trek/ Legion of Super-Heroes crossover in the near future.
Posted by The League at 8/05/2011 12:38:00 AM

I'm going to give this storyline a read when it finally makes it's way to me via trade. I've been impressed by Roberson in the past and I'm liking what I'm hearing for you.

I saw some pages on line and Jamal Igle knocks it out of the park again. I also so the Superman Squad in a few pages which I thought was a real cool idea. A question for you. I know the Superman Squad appeared in All Star Superman but when did they first appear? Or are they another Alan Moore creation from his time on Supreme.

You know, that's a great question. Chronologically, I personally read DC One Million first where Morrison floated the Superman Squad concept in passing (and used it in Final Crisis, All-Star and One-Million-related projects). But I think Supreme was in print, first, but there's no saying that Morrison actually read that. I don't know...

You can definitely point back to the late Silver Age and Bronze Age when they would tell stories of Superman's children and grandchildren, etc... and it was indicated that Superman's legacy would extend far beyond just Kal-El of Krypton. But the Squad...?

Man, that's a tricky question. I'll check my reference books at home and see if the Superman Encyclopedia has an answer that I don't.

Really? That's interesting. I'll definitely need to check it out.

There's something about sci-fi from across the pond that I see in Dr. Who and other places that is more willing to explore concepts on a grander level than American sci-fi, that seems obsessed with analogs for real-world events, etc... and keeping things contained within a certain concrete perspective. I think there's a place for that in sci-fi, but I wonder how and why stuff coming from Europe and the UK seems to embrace wilder ideas than we can generate here (which seems more about which aliens to have sex with versus which ones to run from and hardware and toys).

I won't colour your perceptions of the two works by drawing parallels but if you do get to read Captain Britain we'll have to talk about it. I have the trade if you want me to loan it to you?

Good sci-fi to me should always be an extrapolation of current day events and what their possible ramifications are on the future or a allegorical way of writing about present day events. I've recently been reading a bunch of manga and I'm amazed but not surprised on how much of it stems out of the atomic bomb being dropped on their company.

I don't think its a wrong reading to use sci-fi as allegory. Its what I grew up on, and I think its how we tell parables in the 21st Century. But...

When it gets limited to something like "Avatar" where its "substitute Earth people for any generic colonial invader and Blue dudes for any indigenous people, stir" for a formula, I get a bit more excited these days by things like Fortresses of Solidarity located in the Still Zone, and the implications thereof.

But, yeah, I mean go back and watch Metropolis and the reason it lives on isn't just the cool robots and lavish design, the arguments the movie makes that were so relevant in the 20th Century continue to resonate.