This week the single volume edition of Terry Moore's Echo hit the shelves at your favorite comic shop (if it didn't, change comic shops.  They should carry this kind of stuff, too.).

I followed Moore's Strangers in Paradise off and on, and it was one of the books that got Jamie into reading comics back in the day.   Moore's artwork is easy to spot, and while he could go off and become a penciler for DC or Marvel, I'm glad he's always stuck to his guns and indulged his writing as well as his pen and ink.

If I kept leaving and coming back to SiP, it was because I couldn't tell what Moore was doing with the series.  It went from a sort of suburban melodrama/comedy to having secret organizations and martial artists and god knows-what-else.  It was his series, and he could develop it however he pleased, but coming out in single issues, it was a bit hard to swallow over the span of years.

Of course, Moore DID wrap up SiP with what I considered a satisfying conclusion.  With a few years between the end of the series and now, I've been thinking of filling in the gaps I have in the series (I read it as a mix of trades and floppies and stopped and started during the duration).  Moore has since released an affordable 6 volume set, and its tempting to try re-reading it from beginning to end, because I think Moore knows what he's doing more than I gave him credit for.

I didn't know Echo would be a limited run story when I first picked up an issue, but I found the first two issues interesting enough that I decided I'd pick up the trades. 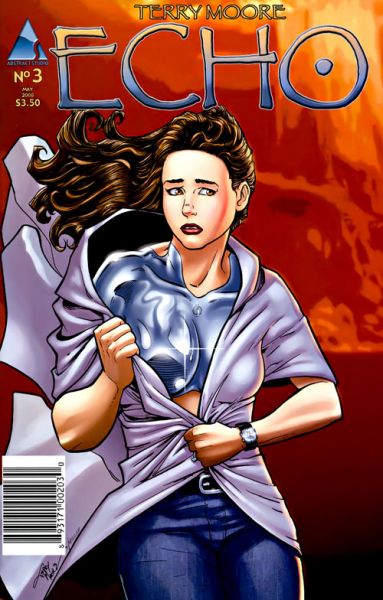 Echo reads like a novel, and its a bit unfortunate that the comics industry is set-up in the serialized format rather than the book-market format where Moore could just go off and create a read that he'd release as one large book without the artificial constraints of both the single-issue format and the business thereof getting in the way.   Recently, the series ended in single-issue format, and the 6th trade was released.  I've now read all six volumes, and I think it would be a great read, especially in the One-Volume format (originally 30 issues).

The story is modern sci-fi (a departure from SiP), and, of course because its a Terry Moore story, our protagonists are middle-class youngish women full of quirks and surprising strength, both realized and hidden.  The overarching arc of the story is near-superheroic, I suppose, but its an ensemble story with most of the characters set up as mere mortals.

Photographer Julie is out taking pics in the desert when she witnesses an event in the sky above involving a jet-fighter and a burst of light.  Afterward, a hail of silver pellets falls from the sky and begins to adhere to her skin.The silver seems to contain strange properties, such as an ability to generate an electro-static field and, perhaps something else.


Sure, the story then becomes about Julie and the secret agencies that want her dead or alive, but the cast surrounding Julie from rogue agent Ivy to her sister, Pam, are all well-imagined, if almost a little too comfortable in Moore's telling.  I like that Moore's characters always feel lived in, and that there's a lack of...  artificiality to the characters allowing for a certain amount of gray to exist within primary characters.  And Moore embraces and enjoys the imperfections of his protagonists, always knowing where the line is between idiosyncrasy and cute & cloying.

If I had one issue with the story, its that the scale seemed somewhat small in a weird sort of way.  I'm not sure what the story might have looked like bolstered by a massive escalation of extraneous characters, etc...  and I am glad Moore was able to keep the cast to a manageable level in the limited run-time of the series (30 issues), so its not a complaint so much as an observation.  But the scale issue means that characters who should be out of their depths are frequently and thoroughly assisted by the deus ex machina of freelance agent Ivy, who becomes embroiled in their story. 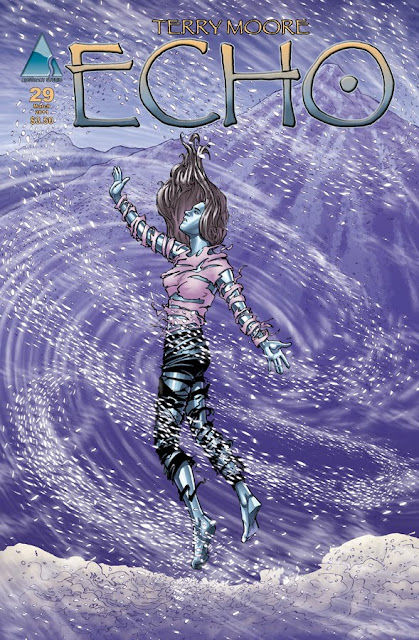 At thirty issues, the story manages to wind around a bit and give the characters room to breathe and develop without meandering and still keeping the urgency of the story at a steady boil.

Moore is trying to tell a story that doesn't ever spell its conclusion and "the moral of the story" in flaming letters, but its clear enough what I think he was going for, and its not something I think he could have pulled off in an ongoing.

You won't necessarily find Moore pushing the boundaries of comics with this one, but you will get terrific craftsmanship in regards to art in all aspects, solid character development, smart dialog, and a storyline with a  mystery solid enough to keep me going for the duration.

If you followed SiP, there's no doubt this is Moore, but he's calmed down some of his enthusiasm and is just getting better at storytelling in the comics medium, and he was no slouch before he moved onto this project.  I found the silence on this title a bit surprising while it was being printed, and wonder if the audience for this comic is more likely to find it in the book market than at the local comic shop or in the usual comics sites.

Anyway, I'm pleased to say I enjoyed it, and not just as a slight diversion from my usual reading.  Its a good, fun read, even as it explores mayhem and hangs under that cloud of melancholy that seems to infect Moore's work.

From what I've read so far this starts off as a Julie story but then becomes more of an Ivy or Annie story. I read an article with Moore and it seems like the characters took him in a different direction than he expected and that may have led to a rushed conclusion. I'm looking forward to reading the rest.

That does make sense. Ivy does start off as one of Moore's interesting but tangential characters and then begins to really take over the story.

I think all writers can do is listen to the story their characters are telling them, and then tell that story. Julie's story is so enmeshed with that of the other two, its easy to see how that happened.