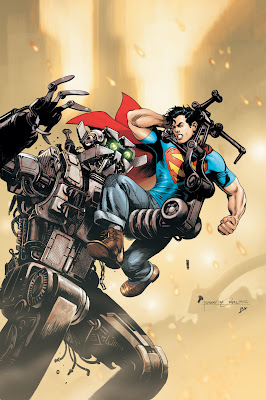 One of the funniest things about this issue wasn't what was on the page so much as a few comments I read online. Man, a lot of superhero comics fans really, really do not know their Superman. Even after the recent terrific Brainiac storyline in Action Comics by Geoff Johns and Gary Frank, culminating in the crazier and better bits of the conclusion of the massive New Krypton storyline.

It's just plain odd to see speculation bubble up online on regular-ol' mainstream comics sites with speculation regarding a clear homage to the 1980's Brainiac ship (recently revisited in mainline Superman books) and a black, purple and green alien bottling cities.  Its sort of the equivalent of seeing three claws pop and a "snikt" sound-device, and then wondering "maybe this is someone entirely different?!"

Look, DC is going to update the DCU.  They aren't going to radically alter or change their IP at this point.  Its going to be largely about making the world of Superman make sense in a modern context, not just changing things up for changing's sake.  We did that.  It was the post COIE DCU, and it took multiple cross-over events and 20 years to get the DCU back in working order, especially the Superman books.

Of the relaunch issues of Action Comics, this issue strayed the furthest into both the Silver Age, science-fiction aspect of Superman and focused the most on "what is happening" rather than uncovering the world of Superman in bits and pieces through action in the story.  Sort of.  Rather, Superman was one of many players in this issue, and with less panel-time and with more happening, it did feel we got lot "who is Clark Kent?" and more "oh God, alien invasion!".  Or, more accurately, a sideways take on the old Mechanical Monsters episode of the Fleischer cartoons as Lois watched the Terminauts roll off the line.

Frankly, I'm surprised the sci-fi connection happened so early in the series as it seemed Morrison was headed in the direction of exploration of Clark as social-crusading superhero and less on the sort of otherworldly threats that marked the Superman comics of the post WWII era.  Its a bit of a change in tone, even while keeping with Waid's concept from Birthright (or even JMS's Earth One) that Superman would earn the trust of Metropolis during an otherwordly invasion.  At any rate, even as he's setting up the pieces of the Krypton mythology, its interesting to see how Morrison zigs and zags.

But, I confess, we're probably going to need a bit more meat to explain who this strange visitor from another world really is.  I'm not sure that Joe Average Reader off the street would understand what Morrison seems to be doing, or why the story seems almost entirely in media res.  Its an odd choice for a #1 and beginnings concept, but also true to how Superman originally appeared, fully formed, without a lot of time to explain his background, etc...  He just was there in his outfit, ready to go.

Of course, bringing in Kandor, as one assumes is about to occur, is going to change things a bit in regards to Superman uncovering his origins.

This issue pleased me with how easily it reintroduced three major players in the Superman comics in one issue in a way that made complete sense within this continuity. John Henry Irons had debuted in issue 2, of course, but this issue we get our first look at Steel (and he gets a backup feature, which could not make me a happier kid). John Corben, also seen previously, is now a version of Metallo, and, of course, if you know your Superman at all, its not even a spoiler to say we're getting our first look at the new version of Brainiac.

Honestly, its a bit weird to see a take on Brainiac that's so close to Geoff Johns' well thought out take from the past few years, but Johns had really just distilled the better versions of the character, and we don't know all that much yet.  Certainly the self-constructing Terminauts is a clever idea, and I loved the scene where our very young Superman looks up at the tank-headed robot, as lost as anyone else about what's happening.  I assume that was supposed to play in that "oh, we're so screwed this is almost funny" way, because that's how I read it.

I didn't entirely get why Steel's appearance was played out as a literal footnote in the issue.  In many ways, it seems like just tucking in those pages would have made more sense, but maybe in the collection?

At any rate, I enjoyed the issue, and look forward to what comes next on this ride.  And I'm glad we're finally getting non-filler material for our extra dollar.
Posted by The League at 12/12/2011 11:46:00 PM