To me, fashion is a mistur-ee

I recently saw this image online at the NY Times Magazines tumblr.  This is the latest collection from designer Thakoon Panichugal. 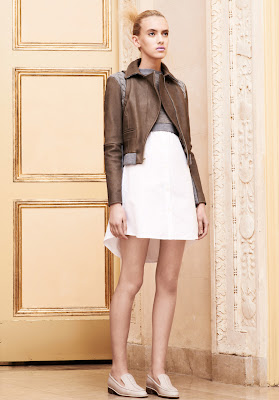 This picture is the worst thing I have ever seen.

Call me kooky, but this outfit is a mishmash of clothes randomly pulled off the shelf from a box store and put on a really dumb person suffering from malnutrition.  I am led to believe that this poor, sick girl has gotten lost on a tour of the house where James K. Polk spent his post-presidency golden years.  She cannot see to the end of the room.

I do not understand fashion.


To my untrained eye, this looks like someone who cannot care for themselves.  I think this girl looks ill.  Her skirt is at least three inches above her navel.  She might be wearing a backpack.  She is so weak from hunger, she cannot stand erect.

This is an aspirational picture.  It is intended to be what you would look like if you bought these clothes.  They are very expensive.  This girl is supposed to be a pretty cipher, but not so pretty that you don't look at the clothes.  Which you should want to wear and buy.  Her body should not distract from the clothes nor make women buying them compare themselves to this human inside the clothes.  To this end, her face is made up pale and plain, her expression glassy and unchallenging.

She appears to have suffered a concussion.

Jamie spends 50% of her time reminding me that most of the stuff I see that I find ridiculous was never intended for me to like.  This includes everything from movies to certain breeds of penguins.  But it took a long time for me to realize that most people do not dress to impress the opposite gender (if that's their preference) or sort of person they're hoping to impress. They are dressing to impress some small circle of people.

There is a large group of women who will find this outfit cute.  They will want to wear skirts that come up to their rib cages and stand knock-kneed in foyers like hungry colts with a partial lobotomy.

I do not get fashion.

I am aware that clothes matter.  I know nobody dresses to impress me.  I would be concerned if they did.

Still, that poor girl is probably pretty when she isn't in a horrible skirt in awful make up and asked to stand like she's got Spina Bifida and has lost her glasses.
Posted by The League at 12/18/2011 03:00:00 PM

Email ThisBlogThis!Share to TwitterShare to FacebookShare to Pinterest
Labels: advertising

I think the simple fact that this look not only attracted your attention, but inspired you to write an entire post on it probably would be enough to satisfy the designer. From what little I know I'd say that looking good actually sort of comes in a distinct second behind simply managing to make an impression these days.

Well, what struck me was that the New York Times Magazine was so taken with this look. I think you're right that "being noticed" is, in itself, no small feat. I am so far outside a working knowledge of fashion that it sounds as reasonable as the next idea.

The NYT Magazine was clearly blown away by this photo, and that was as much what interested me as anything else. It was one of those moments where you say "wait a minute, how is this chic, or beautiful or desirable? What am I seeing (me, personally), and what is the industry saying when they say this is desirable?"

I don't get it, clearly. But I also have to consider who would buy this and why. And then consider the usual assumptions about who we're dressing for.

We are a strange, strange species.