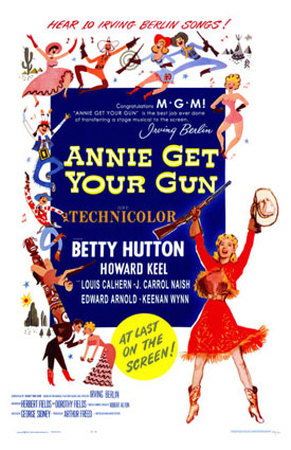 
We'll go ahead and acknowledge the dated presentation of Native Americans, while pointing out the complex relationship the very real Buffalo Bill's Wild West Show had with their Native American performers, including luminaries such as Sitting Bull (a major character in the movie, whose relationship to the show is trumped up for story purposes).

I was frankly surprised by how many recognizable songs are featured in the movie, from "There's No Business Like Show Business" to "Anything You Can Do I Can Do Better".  Hutton is appropriately daffy and adorable, even while playing the rube-ish Oakley like a mix of a seven year old and squirrel, setting the stage for Ellie May Clampett, I presume.  One wonders what the movie would have looked like had Judy Garland been able to complete the film (she left the picture early-on due to Garland-esque issues such as "exhaustion"), but I liked Hutton's moxie.

It would be a shame not to mention the costuming on this film which is absolutely a technicolor explosion.  From the various outfits Hutton wears to the outrageous Buffalo Bill Cody western regalia to the Sioux outfits, its impressive in that Show Boat era manner.

I recommend reading the Wikipedia page on the real Annie Oakley, who led an absolutely fascinating life.
Posted by The League at 1/16/2012 06:03:00 PM