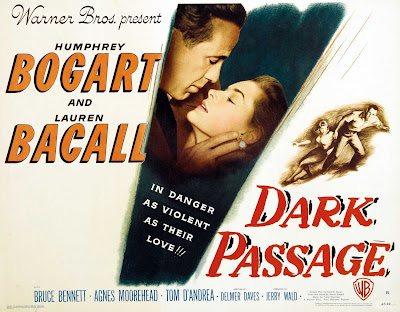 Dark Passage is a Humphrey Bogart/ Lauren Bacall movie in which Bogart plays an escaped convict out to clear his name.  Bacall plays the woman who believes (and has believed since his trial), that Bogart was set-up, that something wasn't right about the murder charge.

The cinemtography, both in the sections and from Bogey's POV and afterward, are pure noir dynamite.  The script is aces for punchy crime-thriller characters to deliver, and between Bogart, Bacall and Agnes Moorehead (you know her as Aunt Endora from Bewitched), just listening to the movie is pretty great.

The movie is largely Bogart's, and Bacall isn't given much to do other than be smarter than everyone else in the picture (and, as always, that's exactly what she does).

Part of what I really felt while watching this movie was exactly how perfectly taut the script had been written, with a sense of danger that doesn't really let up until the credits, the fact that characters are unpredictable, and things don't go smoothly for our protagonist at any opportunity.  Both adapted and directed by Delmer Daves, it may be a thing of his to build such tension as he also directed the original 3:10 to Yuma.

I had not seen The House on Telegraph Hill, nor heard of most of the cast before this weekend.  But there's a reason Muller placed this movie on opening night.


Arguably a "woman's picture", as they were referred to during the era, the movie follows a Polish inmate from a German concentration camp to the US.  She poses as a friend who died in the camp, the mother of a young boy smuggled out of Poland to the US where he came under the care of a wealthy aunt who passed and left her fortune to the boy.

What's interesting about this movie, aside from the casting of the lovely and talented Valentina Cortese, is that Corstese's character's arc shouldn't have necessarily placed her in the position of the film's heroine, but it adds drama and suspense to the film.  She's not the boy's mother, but she grows to love him.  She stands to take part in a fortune, and while she clearly enjoys the wealth, its not her driving factor.

There's a hint of Hitchcock's Rebecca, enough so that one wonders if director Robert Wise (one of America's greatest directors) wasn't playing with the audience's conscious or subconscious expectations.

I have to also tip my hat to Richard Basehart, who is utterly convincing in his role as Alan Spender, the man who falls for Valentina Cortese's Victoria/ Karin.  I could really grow to like Basehart, and will be seeking out more of his work.

Muller is no chump, and he knew what he was doing.  Both movies use San Francisco very well as a backdrop and to give character.  Both are exceedingly well crafted bits of storytelling, and I'd recommend both of them.

The audience was ready for Dark Passage, one that we'd all seen before, but was in deep with The House on Telegraph Hill, which received a great reception from those in attendance (complete with audible reactions).

One fun bit:  Before the picture, Muller admitted he'd tried to interview Valentina Cortese, but that a series of mishaps and a minor health issue for Cortese meant he'd been foiled.  So, he recorded the audience wishing Cortese well.  1400 people.  That's pretty great.
Posted by The League at 1/21/2012 06:20:00 PM