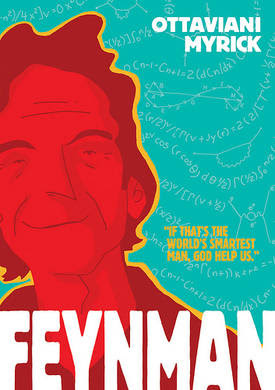 
There's no question that Feynman led a remarkable life, from his schooling to his involvement at Los Alamos to receiving a Nobel Prize and beyond.  That's fact, and that's record.  Using a first person narrative for a biography such as this could be tricky, as the author is speaking for a man who passed in living memory, but he was also a well documented and much-recorded person.  If the voice is not Feynman's, its at least consistent in tone, and Ottaviani embues it with enough personality that I could buy it.


Ottaviani's take on Feynman stems from the dual and not-in-competition aspects of his nature as a rigorous seeker of knowledge and as someone who, by nature, finds the process of finding a solution to be as fascinating as the solution itself.  Between the two, Feynman's approaches are somewhat unorthodox, leading to new thinking in quantum theory as well as education for physicists (and laymen about physics). 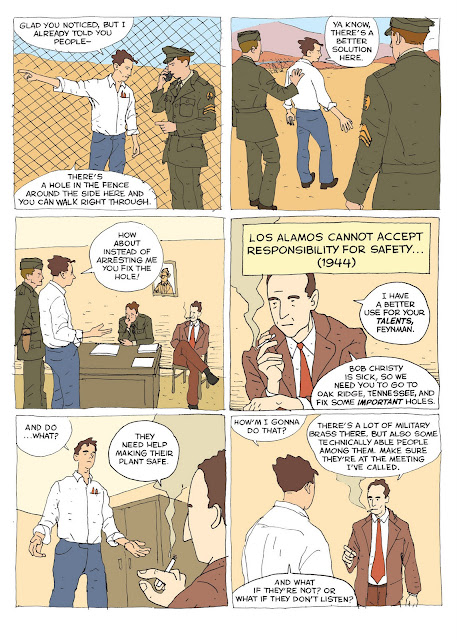 I found a sample page online and included it above.  I think its a decent example of how artist Lelan Myrick handles the page.  Its clearly a cartoony style rather than illustrative, but as the characters age, that cartooniness works well to his advantage.  And its not as if his understanding of angles and design don't work well to convey the intensity of moments or share the story.  The thin, simple lines keep the art clean, and the earth-tone pallette (a stark contrast to the neon glow of the cover), gives the book a good wash as it transports us across the 20th Century.

The anecdotes shared seemed to leave out why Feynman was important, but, again, I tip my hat to Ottaviani for understanding that the finale was not the Nobel Prize or the life events which come afterward.  Its in the excitement of working panel by panel through a Feynman lecture on the fundamentals of light (a topic I've seen other comics on physics attempt and fail), to see how and why the natural world can only be tamed by math and equations, and that those equations do not come easily.  A fascinating climax to a book, and I think I actually followed it by following Feynman's suggested method for grasping scientific material with which you're struggling related earlier in the volume.

Following this lecture, we get an additional challenge, in which we see a high stakes game played out in which the numbers do not add up, and there's much to be read into that sequence that Ottaviani never explicitly states.

I was quite taken with the book.  I spent my day off reading it cover-to-cover in bits and spurts, and I'd certainly suggest it for anyone looking for a comic that is neither superhero adventuring nor the mopey morass that can pass as "everything else" in comics, too often.

Ottaviani also released a book on the moon shot, T-Minus, The Race to the Moon, that I'll be picking up soon.  In the meantime, I highly recommend the book.  Its only out in hardcover at the moment, but I think it may be available in paperback later this year.  Also, as Jim is a librarian, I am sure he'd agree that you should check your local library.

I haven't read the comic, but from the brief excerpts I've read, it looks like it's based on Feynman's memoirs, What Do Care What Other People Think and Surely You're Joking, Mr. Feynman! Good stuff, and I can see how it would translate easily to a comic form.

The afterword is basically Ottaviani's reading list with a few notes, and he definitely recommends those books (and/or a combined volume including both). I looked them up, and they're reasonably priced. I want to give myself a few weeks before I decide I actually want to read them before impulse buying the books.

And I totally thought of you while reading the book, thinking "I bet Matt's read this guy's stuff".

I really enjoyed this GN, got it for X-mas!

I alos want to add "Genius", the Gleick Bio, which I thought was great.

Ooh, and if you're into GNs on theoretical math stuff, there's "Logicomix" about Frege, Russell, Wittgenstein!

I have Logicomix in my stack at home, but haven't read it yet. I will push it higher in the "to read" list! And I'd not heard of "Genius", so I'll see if I can get my hands on it.

I was introduced to Feynman by a colleague who came over from India and greatly admired the man. After reading more about him I realized there was a lot to admire. I'm going to have to grab this from the library.

I think this is a great YouTube clip of Feynman explaining magnets to a interviewer:

My takeaway from that clip is that Insane Clown Posse did not have patience with Feynman's answer.

The book has been out for a few months, and your library may well have it! Its a good afternoon read. I think you'd enjoy it.