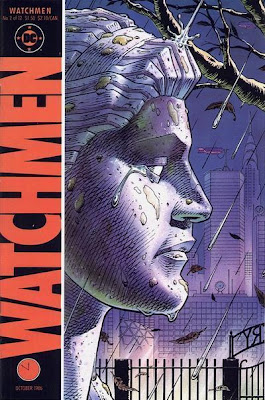 3.  Judd Winick delivers a 6 issue series that asks "what if Hooded Justice came back, and surprised The Comedian by, you know, being alive and stuff?"  Also, probably sex.
4.  J. Michael Straczynski will tell a watered down and unlayered tale of Captain Metropolis that starts with some good ideas, sort of flounders for a bit, and then you can tell he really didn't have an ending in mind.  But, you know Babylon 5 was kind of popular before Firefly and Battlestar Galactica, y'all.  12 issues, of which we'll get 7.
5.  A Silk Specter I and Silhouette team-up series drawn by Ian Churchill and edited by Eddie Berganza.  "I promise titillating secrets will be revealed," says Berganza.  "Also, its for broads who don't normally read comics."
6.  "What was the Cold War?" will be a 20 page pamphlet written by an history senior at SUNY explaining to the kids educated under "No Child Left Behind" what history is, and that Russia is a real place we used to not get along with particularly well.  Illustrations by Pat Lee.
7.  Dan Didio takes up the pen again to write "Captain Comedian and The Laughing Battalion", a gritty book about the last great war fought by America.  Guest starring Dr. Manhattan.  Didio is promising "the Comedian just might find a little romance between battles".  Promises to finish reading Watchmen at some point.
8.  Jim Lee takes on a 70's-era mystery involving the original Nite-Owl and his successor.  Promises "lots of explosions and heroic posing."  1 issues.
9.  Rob Liefeld takes on 4 books interlocking the stories of Morloch, Big Figure, and two all new characters of his own creation.  "I'm very happy to keep Rob working," says Jim Lee.  "He has pictures of me doing blow off a dead hooker from our days at Image, and he'll use them against me."
10.  Chuck Austen gets a 12-issue run on a Dollar Bill series because @#$% you, that's why, fanboy.  You're going to buy these, anyway.
Posted by The League at 2/01/2012 11:46:00 PM

These are all better than what will actually happen!

I'm gonna have to crack open the long-boxes and recall what was going on with that mini-series. I think I really liked it, but that was an era when I really liked ska music, so who knows?

Love #4 & #9. If only I could muster any outrage for DC. They've become such a self-parody, it's just not worth the energy to care anymore.

I think this post was instrumental in me moving from general irritation to enjoying the terribleness.

@Fantomenos- I am not picking up the 12 because I have no recollection of the prior 8 issues or so aside from the first issue. I will consider the trade, but realistically, no I won't.