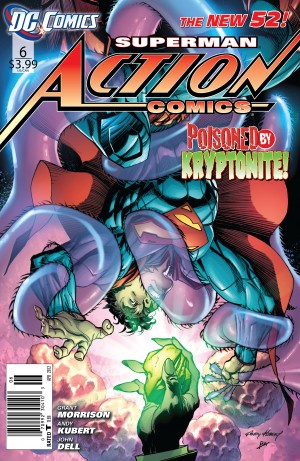 The story assumes a lot on the part of the reader, feeling far more like an established DC comics story that would have fit in neatly into a pre1986 Superman books or the Johns/ Busiek 2006-era reboot...  But here?  Why now?  I guess what I'm wondering is how is that what is arguably now one of DC's two flagship titles could have this many production problems this early on, the sort of stuff you politely ask regular readers to pardon but can damage a new series?

I know Morrison and DC intend to synch up The Legion with Superman, something I fully support, but showing an adult Legion in Action Comics #6?  I don't know.  It reminds me there's a Legion title that has quasi-rebooted, but not really, and that this ReLaunch is just an incredible mess when it comes to Superman's continuity, and will be for years to come.

As a mid-tier Superman reader (no seriously), this was a pretty good self-contained Legion/ Superman story.  It did what Morrison has been doing, which is re-establishing continuity through action and dialog and a minimum of exposition.

The issue introduces a threat of a sort of Anti-Superman Squad.  I don't think these are folks we've seen before (the one player I thought to be Terra-Man was "Nimrod the Hunter"), but the smallish fellow who has appeared since the first issue is in play, making me wonder who this is and how it will work if its an established character (I have one in mind, but I'll bite my tongue).  The dialog hints at both the different forms of K, all of which our villains seem to have a relation to, but it also suggests that Morrison has plans to explain Kryptonite a bit more at some point.

Taking place five years after the conclusion of the events started in Action #4, with a more experienced Superman who clearly seems more in line in feel with the Superman Morrison presented in All Star Superman, Superman's speech patterns had the somewhat distant way of speaking that echoes the dialog and internal monologue of Silver Age Superman (you can pick up any of the Showcase volumes to see what I'm talking about).  All that's missing in this issue to get us back to a recognizable Superman, really, is the red trunks.

I found the villain's plot a perfect one-issue, one-off story that managed to perhaps answer some big picture questions, demonstrate that Superman is still, at his core, the same overcome-any-obstacle-even-at-peril-to-himself Superman we've come to know, but who has been, in a way, absent from the DCU for 6 months rather than at the core of the DCU as he's been for 75 years.  The flashbacks included in the story, as well as some small details we can pick up regarding Superman's traits/ powers (clearly his Super-Memory is reinstated), demonstrate a bit of foundational material for our Man of Steel.  Populist Jonathan Kent is clearly a major figure in building Clark's moral compass, and with last issue, we see the nature and nurture sides of Superman's drive.

Between the events of issue 5 (I did not review) and this issue, I'm confident Morrison is leading Superman in a direction I am happy to go, respecting the key elements of the past and establishing Superman for today and tomorrow.

The past two issues have also featured excellent back-up features.  My only concern on these (well, the art wasn't my cup of tea on this one, but it wasn't distracting), is how the collections department will be able to include this material in trades, clearly the long-thinking goal of the relaunched DC.  But its been a great way to get a peek at Smallville-era Clark without an unnecessary Superboy series or mini (at least at this point).  The emotional resonance is all there, as well as the re-establishment of pre-Crisis status issues and small details taken care of (such as who now lives on the farm).

Anyhow, I know the Legion is a big piece of jerky to bite off and chew, but I'm glad that part of the mythos is re-established (and the importance of the flight ring makes all the more sense now).  I'm still firmly behind Action, and am beginning to wonder exactly what sort of epic, multi-year ride grant Morrison has in store for those with patience to hang on.
Posted by The League at 2/05/2012 10:47:00 PM