In Robert Downey Jr.'s fourth turn as Ol' Shell Head, we see what Marvel is going to need to wrestle with as its franchises become as familiar as James Bond or Santa Claus.  What now?  What's next?  What superhero trope are we going to check out from the library and use for this movie?

Well, this was the "strip him of everything he has" story/ "what is the hero without his powers?" angle.  And it works better than you'd think.  Sure, you get limited armor action, but writer/ director Shane Black makes sure to resolve any deficits you might be feeling with a big, explosive conclusion that should make you forget that for 90% of the movie, Tony Stark is not in the suit.

Like the first Iron Man film, this one reflects back the headlines of the modern era, with a mix of politics, elusive terrorists, media management, and a few other bits that I don't want to get into for spoilery reasons.  The gang is back together, from Paltrow as Pepper Potts, to Don Cheadle as Rhodey.  Tony might not be doing so well in the wake of the Avengers' first team-up as he wrestles with PTSD, meanwhile continuing to explore the limits of the man-machine combination he's become and continues to explore as he seeks to build a better suit of armor. 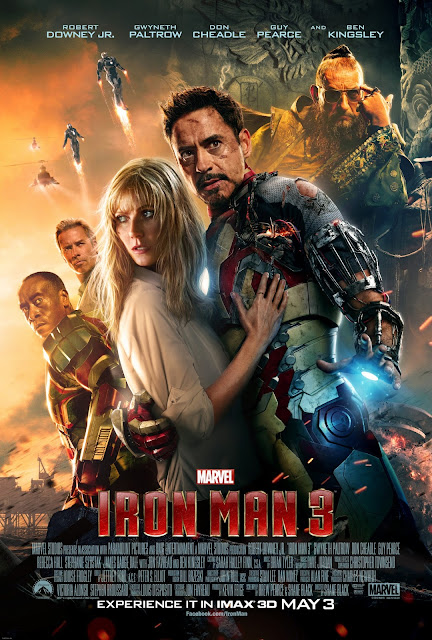 I'm not telling you kids anything you don't already know.

They say that RD Jr. is saying he won't come back for a 4th movie, and maybe that's true, or maybe he's working on contract negotiations.  I wouldn't want to be the schmuck trying to step into his jet-boots.

Fun, summer action movie and pleasantly free of signs that the Avengers franchise is beginning to decay.

The guy who sat down next to me, somewhere around my age - maybe a bit younger - was enjoying the Alamo Drafthouse pre-show and incorrectly identifying characters from old Marvel cartoons, including - somehow - identifying The Mandarin as Bane.

If "Fake Geek" is an issue - this guy was definitely one.  It's weird to hear someone so obviously enthusiastic (and trying to show off) misidentify characters and have to just sit there, biting your tongue.  What do I have to gain from turning on two total strangers and blurting: "Oh, for God's sake!  Psylocke?  Really?  She has a bronze mask and a pistol.  Clearly that's Madame Masque!"

For a long time, that sort of ability to identify and categorize was a key element to demonstrating the work you'd done to be a good comic geek, and now the breadth and depth of superhero comics has entered into the popular consciousness, thanks to movies and the long tail of older-skewing comics and cartoons.