Well, we haven't quite closed up shop yet.

When I came back to blogging after about 6 months of non-blogging, this site struggled a bit to find its footing, but eventually it found its place in the firmament.  Whereas I believe League of Melbotis was a much more personal journal, at The Signal Watch we've tended to stick to pop-culture review a bit more than just enthusiastic boosterism, and even at that, we stuck to a few topics more solidly than we'd done in the prior incarnation.  Superman.  DC.  Noir film.  Mainstream sci-fi franchises.  You tell me.  I don't know why you humans keep showing up. 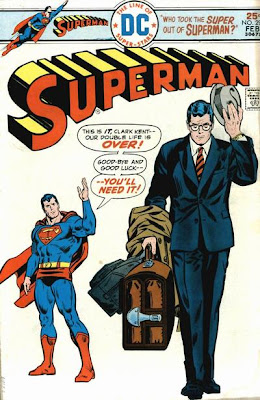 I've appreciated that I do feel comfortable posting personal items here as well.  I think the ability to share some of my life here in Austin helped to contextualize where I'm coming from, and - sometimes I find the elliptical manner some web writers feel compelled to discuss their personal lives a gap in the reading.

Something I most certainly did not mean to do when this blog started - over the past three years this site may have managed to document the end of a comic fans' unbridled enthusiasm for a genre and medium.  Which, man, I have no idea how that read to longtime readers.  Times have changed, and I started this site just as I was moving out of the target demographic for purveyors of pop culture.  While I knew that, inevitably, the nature of comic fandom changes for everyone, I didn't intend to chronicle that change over the past few years.  Frankly, I also didn't expect for there to be such a hard stop to the love affair with so many aspects of comics and geek culture, but there's a reason you never hear the term "good break-up".

As per blogging, at some point towards the end of winter, I felt the old malaise set in.  The same need to close up shop and do something different for a while that I'd felt while working on League of Melbotis would manifest as threats of blogicide.  Eventually, when life had changed enough from the intended use of the blog, I knew it was time to call a breather and rethink the enterprise.  There's only so much to say, so many arguments to shout into the wind.  And, we're there again.

I appreciate all of you following over the past few years, all the feedback and interweb friendships formed, and I hope we all keep up, but for a while, this site is going dark.   Hopefully this isn't one of those "closed for remodeling" signs you see restaurants put up when they're shut down and saving face.

Because this is an indefinite hiatus and not a final curtain, I'm not feeling misty-eyed or sentimental.  But I also don't want to leave any questions unanswered until we fire up the thrusters once more.

My plan is to write some about Man of Steel, and then call it a day.  So, that's what you've got to look forward to.  Frankly, it's also a busy week this week, so, I can't guarantee a post every day.

This time next week, you'll get a final post of some sort, but we're giving fair warning.  And, I figured I owed something of an explanation here so it didn't get lost in an email thread or in the comments.
Posted by The League at 6/10/2013 09:30:00 AM