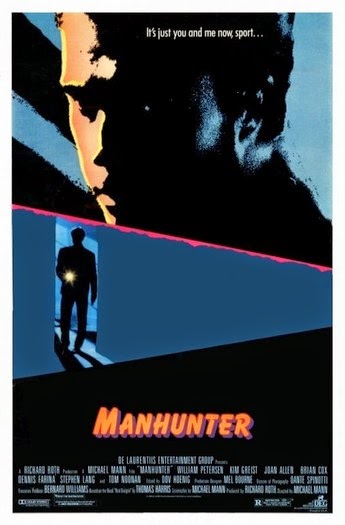 
I'm not sure what to say about Red Dragon in particular.  It's very true to the book, and would be a great way to skip your reading assignment if it came up.  The acting is all good.  Hopkins is still as stunningly good as Lecter as ever - the dull eyes of the bored predator until they sort of do that shark-murder thing.

When it comes to our lead, beach bum/ criminal profiler Will Graham...  Look, I like Edward Norton.  He's been in a bunch of movies I thought were pretty keen.  I think it's hard for me to say I've spent equal amounts of time thinking about William Petersen as I've never actually seen whichever police procedural he did for, like, two decades.    But it's two incredibly different takes, especially as Norton's take is far more wounded and less, uh... Michael Mann-ish grim, silent hero.

You really couldn't get further from Tom Noonan as Dolarhyde than to cast Ralph Fiennes.  It feels off from the book, but Ralph Fiennes is no chump as an actor, and he really does make the role his own.  Emily Watson, devoid of English accent, is far less the hollowed out Michael Mann approved female protagonist played by Joan Allen*, and plays the role a bit sweeter and far less distant.  It's been more than 20 years since I read Harris' Red Dragon, and about that long since I watched Manhunter for the first time.  It's hard for me to separate Noonan from the role, as it's far closer to how the character seemed to me in the book, but it's hard to ignore Fiennes' ability to throw himself into a role I imagine people raised an eyebrow at him grabbing. 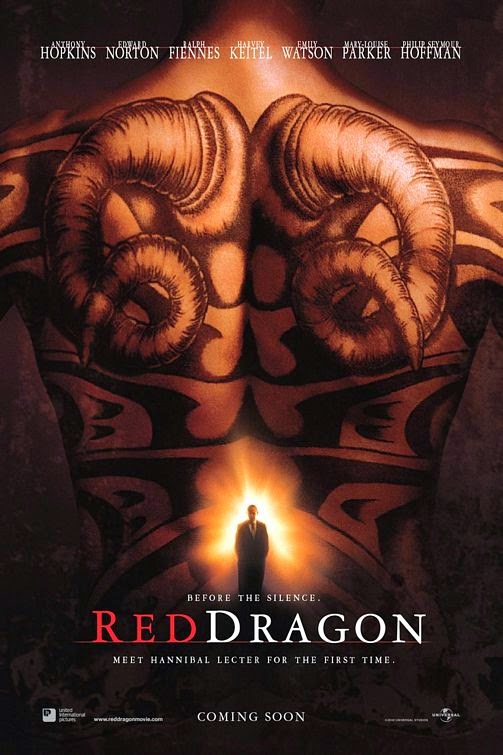 The curious thing about Michael Mann movies is that there's always a distance between the characters and audience, built up by a wall of what feels like previously started conversations and characters who don't see any particular reason to face the camera.  Where Ratner's made-for-the-masses Red Dragon wants you to relate to and/ or sympathize (maybe even empathize) with the Grahams, it's hard to not feel detached and even voyeuristic during Manhunter when Will and Molly discuss Will's past and their family.  But it's Manhunter that includes the awkward conversation between Will and his son in the all-too-normal looking grocery store that stands in contrast to the Michael Mann-approved ultra modern interiors and unnecessary neon lighting.

In 1986, certainly the notion of a "serial killer" was not quite as stamped into the national psyche as it would become as America would eventually turn Ted Bundy and Jeffrey Dahmer into household names.  And Hopkin's performance in Silence of the Lambs would cement the idea, romanticize it, and lead to a decade of increasingly dull copycat serial killer films (including the Sigourney Weaver/ Holly Hunter thriller, Copycat).  It may even be worth noting that Edward Norton, who plays Graham in Red Dragon, made a name for himself playing a serial killer in Primal Fear. **

In a way it's unfortunate that Hopkins is so associated with the role as I quite like Brian Cox's charmless, cold blooded take on the character.  It's certainly true to the novel, as I recall, and he does an excellent job of seeming like the caged animal looking for the keeper to turn his back for even a second.

What's most striking about watching both films within days of each other is that - introduction aside (Red Dragon plays out the capture of Lecter whereas the less-Lecter focused Manhunter begins in media res with the invasion of a victim's home), the two are very much the same movie shot by two different directors from one script until the second half of both movies.  Exact dialog is pulled from the novel in several portions, and, of course, exact scenes play out the same way in both movies.  But the decisions to focus more on Lecter in Red Dragon and Manhunter's version of Dolarhyde versus the novel/ movie of the same name aren't as congruous.  Manhunter wants to play this is a cop movie about Will Graham's extaordinary experience, whereas Red Dragon has a chronology and franchise to bolster (that's not a criticism, necessarily).

But only one movie properly utilizes Iron Butterly's "Inagaddadavida" and breaking glass.

Of the two, Manhunter is an entry in the Michael Mann library.  It is so very, very Michael Mann.  Red Dragon neither suffers from nor really is enhanced by the fact that it is intended to be one in a line of films about Lecter starring Anthony Hopkins, but there's no definitive look to it, no particular point of view you can point to, and it says much about the assembled actors and strength of the material that Ratner's lack of a specific vision still basically works - even as he's leaning on the superior Silence of the Lambs for support.

Did you watch Manhunter after I went to bed or did I entirely black that out? I read Red Dragon in college and it freaked me out, but it's a fantastic book. The movie was fine, just not Silence of the Lambs great.

Oh, yeah. For the record:

Watched Manhunter: at home on Netflix streaming
Watched with: me, myself and I after Jamie went to bed on Sunday.