SW Watches: To Live and Die in LA 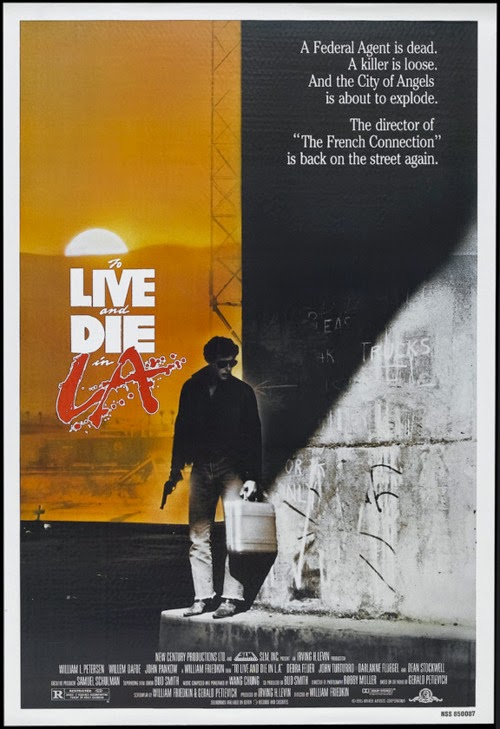 It's not entirely clear how I've never seen this movie as I've wanted to see this movie since at least 7th grade.  Somehow I never connected free time + availability + making it a priority.  But that's the magic of being friends with SimonUK.  You can say things like "Hey, I've never seen To Live and Die in LA." and he'll say "Cheerio, pip pip!  Why, I 've loads of copies of To Live and Die in LA., Gov'nuh!"*  But, yes, it's SimonUK, so of course he owned a copy.  Because he's a hoarder and he has a problem I'm more or less enabling.

And, thus, with Manhunter included, I somehow watched two William Petersen vehicles in less than 24 hours.

If you're like me, and this is the first time you've seen To Live and Die in LA 30 years after the fact, what you're going to notice is that this might just be the ultimate-80's Cop Movie.  In an era with Michael Mann bringing Miami Vice to the small screen, and Die Hard still a little ways off, the director of The French Connection revisited the idea of morally ambiguous law-enforcement officers, in this case - Secret Service.*  William Friedkin didn't invent the cop of the 80's, but he did boil it down to a neon-infused pulpy magazine ad we'd get used to.  Our cops wear sunglasses and leather jackets and tight trousers with boots.  They smoke and drink and don't give a crap.  They have underworld connections, live on the beach and drive impractical vehicles.  There are hookers, artists/ counterfeiters played by Willem Dafoe, unnecessary art-pop dance numbers, trendy music, shoulder pads on women, scenes taking place in a strip-club "just because", and car chases that are totally awesome, but which make no sense.

Oh, and the film has a soundtrack that is about 85% Wang Chung.  Wang-f'ing-Chung.

It took about forty minutes for me to fully buy the movie.  It suffers from the fact that so many other movies riff on the same ideas presented in the first half.  An untouchable villain who everyone knows is up to no good, but somehow no one can touch him (although putting a tail on him for five minutes suggests you'd come up with something).  You also get an attorney played by Dean Stockwell, and a protagonist who bucks against the system.

Up until about the 40 minute mark, it feels pretty rote.  And then the plot  starts throwing you curve balls, things get complicated and you remember this movie was directed by William Friedkin.  Where Mel Gibson's "guy with a deathwish"** is played loud and with much bugging of his patented baby-blues, it's only in what actually occurs around Petersen's Richard Chance that the other characters get the idea that maybe all is not well (and that it will impact them).  And, of course, no one - not one character in the movie is (a) all that well adjusted or (b) not capable of some shadiness.  As bad as our artists/ counterfeiter might be, how good are our guys behind their badges?

The 1980's began the change in American pop culture of believing the only legit heroes were antiheroes.  By the late 1990's, we cheered on Neo in The Matrix as he gunned down civilian security guards  It was probably a necessary evolution in an era after Maddox and Rockford Files grayed the lines a bit on TV (at least in comparison to Barnaby Jones), as TV looked to toughen things up a bit, and movies had a rating system that, at the time, was fairly rewarding to Rated-R content you couldn't see on TV.  And Friedkin had helped pave the way, of course.

But this also isn't a straight "the protagonist is right by virtue of being a protagonist" kind of movie, and portends more of what we'd see later in Training Day (I guess, I never saw it), the difference being how the movie takes a while to let the audience in on that fact.  It's a movie that isn't afraid to play a bit of the long game.

Anyway, I liked it better than I figured I would about ten minutes in.   I'm not sure I'll be adding it to my DVD collection, but it's a movie that probably got lost in any confusion it created for an audience expecting a gritty but straightforward cops and robbers movie, like so many others that came out around the same time.  It's more or less 80's-style noir, and you've got to give it props for that.


*this may or may not be how it was phrased

**I'm not saying someone watched this movie, enjoyed it, saw it was a box-office disaster but recognized the potential and decided to just rejigger the parts into a more commercial version that would better serve people who see movies at the mall.  But Lethal Weapon did come out two years after this movie, and, well...   Let's just say that prior to Danny Glover's complaining, this movie contains an aging cop who looks at his loose cannon of a partner (a partner with a seeming deathwish) and says "I'm getting too old for this shit" before we even got into the action of the real story.
Posted by The League at 1/20/2015 09:56:00 PM

This is the first thing that came to mind:

we're glad to be back!