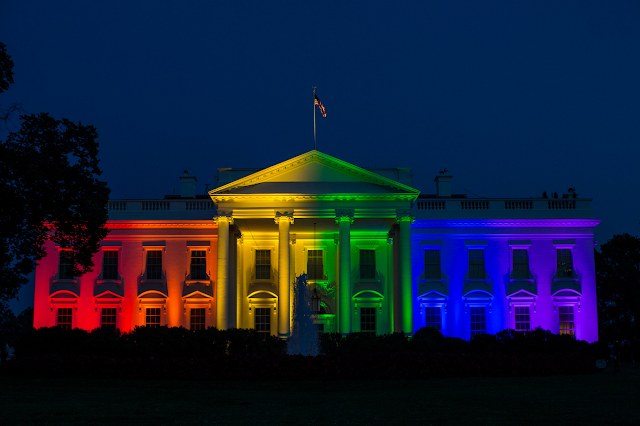 
Let's be honest, it was a narrow decision, and I don't pretend to believe everyone is on board with this.  That's what social media is there to remind me of whenever I log in.

In good conscience, I can't believe that someone else's race, country of origin, gender, sexual orientation, or any of the hundreds of differences that are circumstances of birth or nature - are any reason to deny one another the same dignity and respect we'd grant someone more like ourselves.  I'm a white, middle-class, 40ish, heterosexual male.  I know privilege, and if we're really going to make it a better tomorrow, what better way than to extend those same opportunities to everyone?  What have we got to lose?  The respect of our dead elders?  After that, what?

I got married at 25 to the woman I fell in love with.  Head over heels.  I was lucky enough to be relatively healthy, but Jamie has not been so lucky.  With her various health issues, we could not have children of our own, and by agreement, we decided not to bring a child into our lives.  It's a hell of a conversation to have when the movies paint it as a moment of sunshine and flowers.

The definition of marriage tossed about as a logical and historical precedent excludes me, too.  And a whole lot of other people, either by biology, age, decision, what have you.  It doesn't hold.  And, frankly, I don't want to be included in your club just because we're faking the look of what some people find acceptable.  We knew our situation from the day we met and threw in together, and certainly well before rings were exchanged.  There were no surprises.

I hate to make it personal when I've never experienced the same issues as so many of my friends and colleagues, but there you have it.  It's my tiny little point of perspective.

A lot of other people have been told their whole lives that they must accept their place as second-class citizens, with their legal rights denied, their lives potentially upended, the deaths of their loved ones made a mockery by biological families inserting themselves and creating fictions in a time of grief.   Today changed that, in part.

But...  Nothing will become of marriage.  Couples will still spend too much and walk down the aisle.  People will still come together and form families, have children, grow old together, lean on one another.  It will be no less meaningful to anyone entering into the contract between two people, the only two people who should have a say, really.  Only, now, that same opportunity is extended to everyone, and legal loopholes and anxiety won't be par for the course as they plan lives together.

One hundred fifty years ago, we ended a war in order for one person to admit they had no authority to own another as chattel.  Less than one hundred years ago, we insisted women lacked the mental facility to vote.   It took until 1967 for the South to allow interracial marriage for many of the same reasons echoed by our elected leaders today.  We have nothing to lose and everything to gain.

Today is a good day.  I wanted this post written so I could remember a day when something I grew up thinking impossibly far from reach became real.  We take steps backward with the hate and rage boiling over in places like Charleston, and then something like this comes along even as the public and officials turn from bigotry and repeating behavior simply out of the idea that our heritage demands it.  Today we did better.

This is what the tide of history looks like.  When you watch those films like Selma or docs about the Civil War or people standing up for one another in WWII, this is you living in that moment.  This is you deciding how you want to remember the day things got better.


Wll said, Ryan. I am proud of you for many, many reasons - and this is one of them.

Jason and I were lucky to have parents who were good role-models. It's worked out pretty well.

I'm so glad to see the USA make same sex marriage legal. Sadly in Canada our prime minister just elected a noted anti-gay judge to the Ontario supreme Court of appeals. Looks like he wants to stack the deck against any Gay rights. Absolutely disgusting.

Well, if the internet is correct, expect a whole bunch of disaffected Americans to be moving to Canada, where they seem to believe that there is no such thing as gay marriage.

Right now I'm counting on the fact that the US doesn't want to deal with the legal problems they'd incur if they backed out of this that they're just going to throw their hands in the air, say "whatever" and move on to something else. Once people figure out it doesn't actually change anything in their day, my guess is we'll all move on down here in 5 years.

Good post! I remember serving on the student Senate back at Trinity from about '93 to '95, and the administration didn't want to allow LGBT organizations to use any campus facilities to hold meetings or hold film screenings, etc. They knew that there were gay students on campus, but it felt like the school didn't want to acknowledge them. I believe that the primary reason was that they were afraid that it might hurt fundraising efforts with the alumni if the school became too openly accepting of gays. The people in the student association just wanted to help out some of our friends. We thought of our school as fairly progressive, and we were kind of floored by the fact that the student would discriminate against any of its students this way. We also worked on trying to add sexual orientation to the school's nondiscrimination policy, but the school fought us pretty hard on that, too. We made some progress by the time we graduated, but ultimately we had to hand our efforts off to the next generation of incoming students (the administration just kept trying to put the issue off, apparently thinking the issue would blow over). A lot of change has happened in a relatively short period of time. Trinity now proudly touts its support for LGBT students on its website, and gay marriage, which seemed utterly impossible when I was in college, has come to pass. At any rate, congrats to everyone who supports equality. In a better world, equality wouldn't be controversial.