Jamie informs me that we're getting eight "episodes" of all-new Wet Hot American Summer on Netflix, and I have no idea what that means.  Because as far as I knew, until about 8:30 tonight, it was a movie I've seen once or twice and that I've always liked. 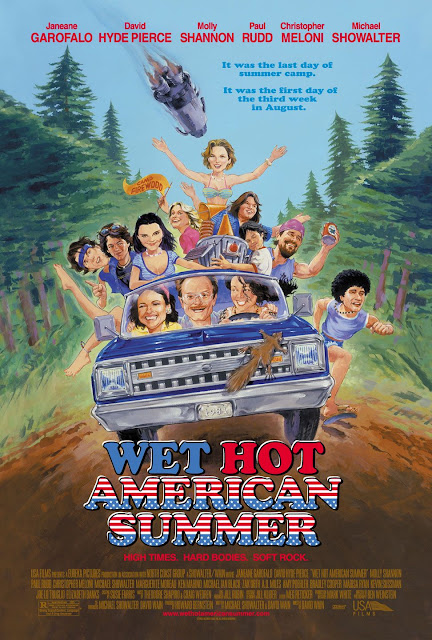 But way back in 2001, a pretty colorful group of actors and comedians came together to make a movie that, by all appearances, was intended to make them laugh, and if anyone else liked it, all the better.  The movie was a spoof on the cliches of both summer camp movies (a brand of movie that I suspect has died out except in weird echoes as kids movies.  I don't even need to Google it to know there has to be a Air Buddies movie where the puppies go to camp.)  But there was a time when there were enough of those sorts of movies that they had their own cliches, I guess.


Anyway, this isn't some Scary Movie-style spoof that's "funny" because it "sends up" scenes from those movies.  It's more... like.. improv and sketch comedy people riffing around those ideas.  And it's actually much funnier than the 1980's comedies its emulating (like Meatballs, which, I have just learned, we were actually NOT legally obligated to watch on HBO just because it was the 1980's).

So, who all is in this movie?

and H. Jon Benjamin as the voice of a can of vegetables

And more I'm sure I forgot and a lot of good people whose names you might not immediately know.

I'm 90% certain the cast had more fun making the movie than audiences initially had watching it, but it's a cable and Netflix staple, and deservedly so.  It's not set-up/ punchline comedy, but it has innumerable great bits, and will, in a weird way, make you kind of miss summer camp for the first time in decades.

I'm particularly fond of the bits that they just went with, from the talking can of vegetables to Joe Lo Truglio's scene watching Ken Marino save the campers.  And, pretty much every scene of Janeane Garofalo. And...

Oh, hell, man.  Just watch the movie.  It's on Netflix.  It's summertime.  You're not doing anything.

It looks like they did get the entire cast from the original for the new episodes (including the can of vegetables) and if that's not enough incentive to watch, they've added even more players:

and about 15 other people I recognized.

You had me until "funnier than Meatballs." I did enjoy Wet Hot American Summer, but it was a little too look-how-clever-we're-being for my taste. It could never eclipse the thing its parodying.

I think Paul Rudd was ok in this movie, and maybe the series.

The Netflix Series is a pre-quel that happens a couple months before the movie, so everyone is 15 years older and playing their character younger than the move.

@stuart - that's a bold call going out there and defending the honor of Meatballs. I appreciate your candor and bravery.

Then it is time. It's that or an Air Bud riff on Revenge of the Nerds.

It's hard to not want to see the buddies in nerd glasses and high-waisted-pants...