The film classic Gojira (1954) has a completely different version known stateside as Godzilla: King of the Monsters (1956).  Released a while after the movie's initial Japanese showing, it features Raymond Burr cut into the movie as journalist Steve Martin - providing US audiences with an American-minded perspective on Godzilla's debut Tokyo stomping. 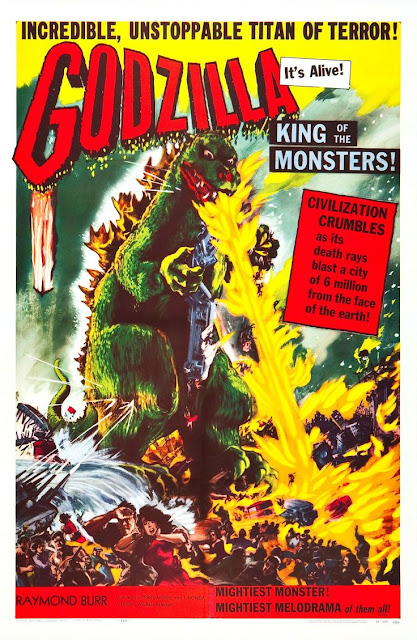 I feel like I must have talked about Gojira at length in the past, so I'll shorten the plot synopsis:  a giant monster shows up in Japan, reaches Tokyo, f's it up something royal, a very cute girl is caught in a love triangle between a square and an eye-patched rogue scientist, they figure out how to kill Godzilla.  Until the sequel.


The original cut of the film is tonally wildly different from latter-era Godzilla when the atomic-breathing beast becomes sort of a hero when he isn't just marauding his way around the Pacific Rim.  He winds up taking in greater threats to Japan than himself, and thus: giant monster fights became a thing.

The American cut of this one-monster movie is not the one I've watched the most, though I've seen it before.  It is...  something.  Burr is literally a reporter and observer.  If you need to prove the Observer Effect - yeah, having Burr there most definitely impacts the movie.  As a pipe-smoking stentorian journalist, he mostly wanders around looking at the activity of the other cut, describing and commenting upon it.  It's entirely possible he could have been in the original cut and just never been seen as the character has literally no impact on the proceedings.  We just sort of lose the more reflective nature of the original movie in favor of a more direct narrative approach, a la a lot of the 1950's sci-fi monster flicks from Them! to The Thing from Another World.

But the monster rampaging stuff is mostly intact (if the march-like score seems truncated), and the impact of Godzilla on Tokyo definitely remains.  And I am basically impressed that neither Burr's character nor this cut treat the source material or characters with an air of condescension.  Really, that may be the biggest surprise of the whole operation.