I won't ponder too long the lack of an Oxford Comma in the title of this movie, but I will say I lost a full two minutes making sure of comma placement in this post. 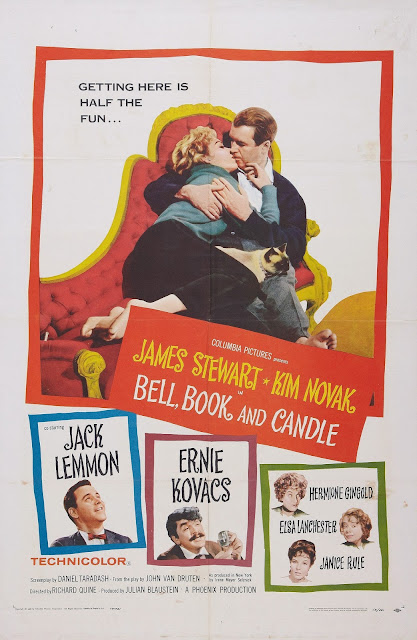 Bell, Book and Candle (1958) is one of those movies that you hear about a lot, but not one I ever had any particular interest in seeing, aside from a cast that includes some great talent.  A just-post Vertigo Jimmy Stewart and Kim Novak (yowza), Elsa Lanchester (formerly the Bride of Frankenstein), and a pre-Some Like it Hot and The Apartment Jack Lemmon.  I actually quite like casual magic/ shadow magical cultures in my movies (see: Mary Poppins), but I dunno.  I watched Bewitched and I Dream of Jeannie growing up, and I wasn't quite sure what all I'd get out of this that's different - aside from the cast.

The movie takes place in Manhattan in the late 50's.  Kim Novak is a lonely witch living in a walk-up and selling Pacific and African art (masks, statues, etc...) who has a daffy witch aunt living on the 3rd floor and Jimmy Stewart recently moved in on the 2nd.  And a bongo-playing hipster warlock brother (Lemmon!).  On Christmas, Novak asks her magical cat to help her find some company - specifically with the already attached Stewart.

There are a few rules we learn:  witches can't cry, and if they fall in love they may or may not lose their powers.

Well...  You know, the most far fetched thing about this movie is that Kim Novak needs magical help to land a dude, but we'll allow for artistic license.

Anyway, magic and romance converge, Novak helps Stewart - a book publisher - get an author in who has previously written on magic in Mexico, and the author starts looking into the witch-scene in Manhattan, which leads to Stewart getting clued in to the fact that he's been... bewitched.

Unlike Betwitched and I Dream of Jeannie, the romance comes from a spell, and it's hard not to see how much of the rest of it plays out as a light romantic romp about Novak slipping something in Stewart's drink.  They don't actively show the sex, but it seems pretty clear there is some magical knocking of boots. 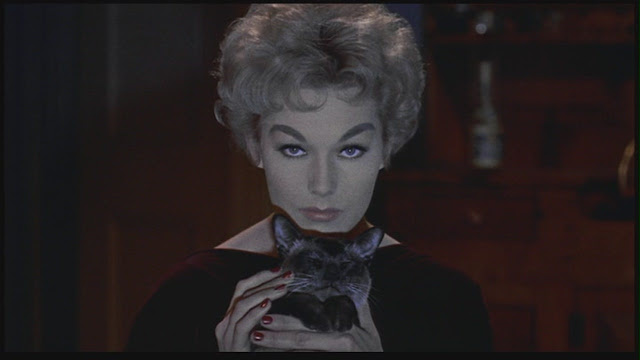 Also interesting for the era is that Novak's character is the sexual aggressor, which I don't think you see all that much in movies of the 50's that aren't noir.  But especially in a movie with Jimmy Stewart in hapless-good guy mode, it makes for an interesting bit of romantic reversal, even if it all does feel like magical roofies.