When I was a wee lad, I remember being a fan of this 1957 Disney production.  Back in the day, Disney did a lot of live-action movies of varying quality (seriously, Disney, where the @#$% is my BluRay edition of 20,000 Leagues Under the Sea?), and often featured stories set in the past.

Originally intended as part of the Disneyland TV series, Johnny Tremain ended up better than anyone was figuring, so Walt decided to repackage it for theatrical distribution. 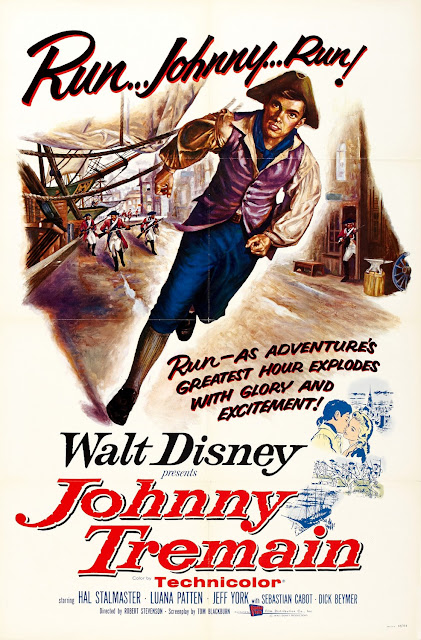 The movie probably left a greater impression on me than I realized, because in rewatching the movie three decades later, I kept saying "oh, yeah, right!" and remembering scenes as they unfolded.  But I doubt I'd thought about the movie for at least the last fifteen years.  I do recall that we watched a lot of Wonderful World of Disney growing up (and early Disney Channel) and read our share of historical fiction, so we got a lot of the G-rated high adventure stuff in our diet that, wonder upon wonders, fit pretty neatly in with the Disney World "Liberty Square" look and feel for history.*  If it was intended to make a tri-corner hat wearing nerd out of me, mission accomplished, Walt.


So, Johnny Tremain is about a kid named...  wait for it... Johnny Tremain (Hal Stalmaster).  He's a silversmithing apprentice in Boston after the Boston Massacre but before the Tea Party, with a view of the Boston Harbor from the step of his shop.  He has friends who are getting caught up in the cause of liberty, but isn't particularly interested.  Dude just wants to smith silver and absolutely not pay attention to his boss's gradndaughter who is all but throwing herself at him.

Leonard Maltin has been introducing the "Disney Vault" movies on TCM lately (he's maybe a smidge overenthusiastic, but it's fun to watch him get spun up),  and he rightly points out that the movie, while firmly on the side of the Sons of Liberty, does a remarkable job of portraying them as men rather than dieties.  It almost feels like a secret club, all the better to appeal to my imagination as a kid, I think.  Maltin also pointed out that the British are never portrayed as monsters, just career soldiers and officers trying to understand the situation around them.  It's an interesting bit for a kid's movie, because it's not the safe choice.  The safe choice is cartoonish villainy and all-knowing founding fathers, not grown men squabbling in the attic of a house.  Heck, I've avoided Mel Gibson's The Patriot because every detail I read about the movie was so broad and many unfounded that I didn't see the point.

Johnny goes through a pretty interesting curve as the POV character for the movie, from indifferent politically to victim of the capriciousness of the system, to curious employee of the patriots to sticking it to his relative offering him wealth and fortune in London which he turns down to go join the crowd at Lexington and Concord.

Historically, it's probably shaky, and leans on the myth as much as fact (Paul Revere and his ride are key to the plot, and the ride itself is mostly the product of artistic license).  But it does give a sort of stirring Boys Own Adventure spin to the Boston Tea Party and other events (including the "two if by sea" business).

I have no idea what kids today would think of the movie.  It was fun to watch again, but may not have aged particularly well, let alone - would anything that didn't feature wizarding academies or Japanese pocket monsters be of interest to the under 13 set?  I dunno.  Nor do I know what they're teaching kids these days about history, so I'm not even sure they'd have the context.