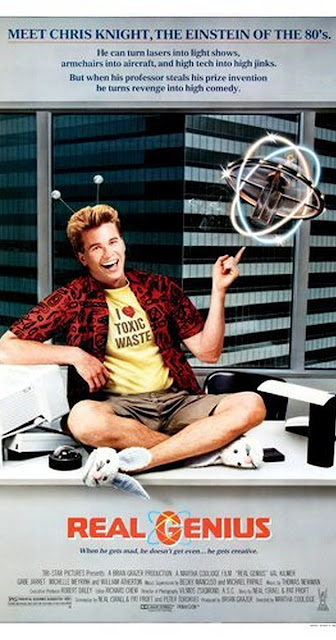 
Firstly, the entire premise of the film is a little weird if you know the slightest thing about research schools and how academic research is funded.  Keep in mind, the young scientists of the movie are undergraduate students, and they are completely shocked to learn the laser they've been slaving away on in their lab will be used as a weapon.  They had no idea why they were even building a laser.

The movie makes much, much more sense if all of the characters are in graduate school, but they aren't.  At big research universities, sure, undergrads do some research, but it's not usually the career-defining work of their advisor - but that could easily be true of an advisor's graduate assistants.  And if CalTech is the school we're to believe it is - where the hell are the grad students?  Further, Chris Knight is supposed to be graduating, but then a single class is held over his head that will supposedly get him kicked out of school if he fails the exam?  That's actually kind of how grad school can work, but it's not at all how undergraduate education works, and with at least 3 and a half semesters under his belt, wouldn't Chris Knight be able to either just take another class or go to administration with his blue book to prove he passed?  Especially with forewarning ("hey, Jerry just said he was going to flunk me out of school even if I passed his class.  Can you make sure that doesn't happen?")?

And, if he is just an undergrad, wouldn't graduate school seem like a more fun and interesting option setting Knight up for a better career in or outside of academia rather than moving into a job in a workplace that seems ill-suited to him?

I know, I know... it's a dumb, light comedy.  But it makes me wonder what got lost during the script drafting process.  Why does Mitch need to be 15?  It actually causes problems not just with the unlikely scenario of a 15 year old being told to take over a lab from 22 year olds o rbeing trusted with a death ray, but it sets up the romantic relationship between Mitch and Jordan as something along the equivalent of statutory (she's 19), and just makes any reference to Mitch and sex, including the Star-@#$%er for academics incredibly problematic.  That character literally says she's "waited 3 years for this".  So, she wanted to jump a 12 year old boy?  It's still illegal til he's 18, so...  why couldn't Mitch just be a rising star who is 18 and got out of undergrad early?

I guess maybe if they're undergrads they don't know or care why they're building a laser.  But, here's a big non-secret: university research is almost entirely driven by grant funding, including the DOD.  One of the tricks of my job is teaching librarians and grad school folk how to not accidentally release government secrets when Sally the Scientist is required to write a thesis to graduate, but everything she did to get that Masters in Mad Science was funded by shady government types who don't want that thesis to ever see the light of day (this happens all the time, btw).  The student sure as shit knows where that money came from, because they know what the grant requires and what's at stake.  And their faculty really, really know.  So...  Anyway.

It's like watching a movie that takes place on a dairy farm and they keep milking the cows through the cow's ears.  Maybe the story of how the farm hands rally to win the big cow show kind of still works, but you spend the whole movie wondering "why didn't they just milk the cows the right way?  Why did this happen?".

I guess maybe someone decided it was more unbelievable for graduate students to all live in student housing to keep the dorm hi-jinks intact, so they made the characters undergrads.  Because, really, the shenanigans in the dorm are the best part of the movie, which kind of makes sense when you look at the credits and realize the movie was written by the same guy who wrote most of the Police Academy movies and Bachelor Party. There's a thread of a sort of anti-authority-and-mayhem-by-way-of-Bugs Bunny vibe that Kilmer makes seem non-smarmy.

What still works for me, it was a good chunk of the movie with over-clocked smart kids tackling their challenges in creative ways and blowing off steam in even more creative ways.  I mean, "now... if we can just keep it from exploding!" is one of the best throw-away lines of all time.  And, of course, the all-too-real experience of walking past people in the dorms doing things you don't understand and you're gonna just keep on moving.

And as much as Val Kilmer's Chris Knight gets the bigger, showier scenes and wacky lines - it's Michelle Meyrink's Jordan that's subtly even more hilarious.  She barges into men's rooms to gift unwanted sweaters, drove her roommate to distraction and is up happily power-sanding her floor at what must be 3:00 or 4:00 AM movie time.  Meyrink isn't exactly unattractive, so it's a little tough to believe she's gone unnoticed by her peer male friends, but we'll let 80's movies be 80's movies.

But, really, the whole cast if hilarious.  William Atherton plays yet another horrendous William Atherton villain, the guy who plays "Ick" should have had a bigger part, because that dude is just funny, Kent's perfect toadiness and curve toward melt-down/ redemption...  All of that stuff works really well.

John Gries, a guy I have personally given a standing O when he came to Austin for a screening of The Monster Squad, is absolutely perfect as the genius who flamed out - our cautionary tale of the child prodigy who doesn't learn to embrace life outside academics and math.  His Frito-Lay scheme is perfection.

So, as much as I enjoy the movie - I also get bummed that you don't see more of Meyrink, Atherton, Gries or the guy who plays Ick.  The guy who plays Mitch...?  eh...  Not the best casting choice in the world.

Want to hear something weird?  Kent's only real peer, who has like five lines?  Milton?  90's-era super producer Dean Devlin, he of Godzilla and Independence Day fame.

I'm still not sure if they actually got access to a B1 Bomber or not, and that's going to haunt me all my days.

I cannot believe that you spent a large part of this review criticizing the academic plausibility of Real Genius. Obviously this is a movie about REAL GENIUSES! Normal rules don't apply!! You can't understand their zany ways!!!!

You sound like you work for the CIA or something.

@anon - Well, I work in libraries, and release of data is complicated stuff for a myriad of reasons.

@J.S. - When I hadn't been to college, let alone worked in higher-ed for about 15 years, I just rolled with it. But now I just feel like it's weirdly lazy writing.

I'm not asking for realism - I'm asking for marginally less lazy writing. (A) Mitch is a new grad student at, say, age 18, heralded for his research in undergrad, and they're all grad students. It would literally only improve the story. (B) Jerry just lies about what he's up to with the laser or where the funding is coming from. The rest is gravy.

Keep in mind, I have NO problem with ice going straight to gas, popcorn annihilation, dudes living in steam tunnels, computers hacking lasers that aren't hooked up to the internet, or Mitch's hair.