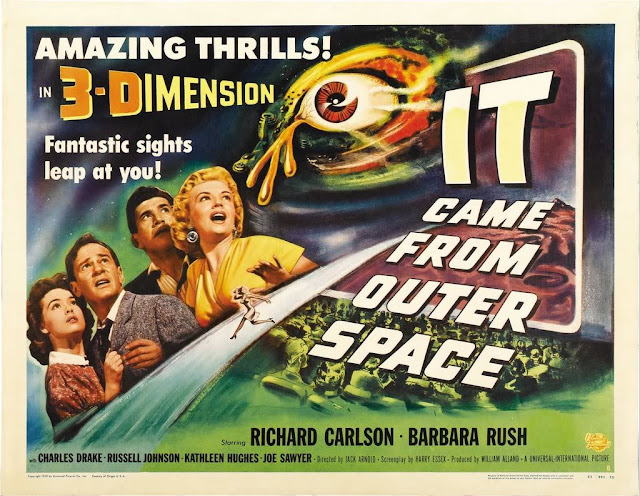 
I want to get one thing out of the way - the blonde on the poster?  Kathleen Hughes?  She's in the movie for, literally, like, two minutes.  She plays Russell Johnson's girlfriend, and all she does is make a slight double-entendre about his "appetite".  But, she's on the poster.  And featured in the credits.

This movie is insanely simple and likely spawned a million imitators, right up to and including Super 8 a few years back.  But happy aliens accidentally causing panic and confusion amongst the locals?  Close Encounters, people?

Something lands, our intrepid amateur astronomer (already considered an odd-ball and "free thinker" in town) goes to find it in the dark, hoping for a meteor.  Instead, he finds a ship and sees something of a living creature.  There's a rockslide that buries the ship and no one will believe him.

And then, of course, weird stuff starts happening and people start disappearing and whatnot.

Spoiler - these are actually fairly friendly aliens, but they are aliens, and that's causing problems.  You've seen this movie a million times, but this appears to be ground zero for this story (adapted from a Ray Bradbury short story, The Meteor) to make it to film.  And, it's funny, because 1953 also features another pipe-wielding intrepid scientist in Clayton Forrester of War of the Worlds (those aliens - not so friendly).

I've not quite uncovered ground zero for the scientist and his perky, doting lady friend archetype - but, man, have Fantastic Four comics been wrestling with keeping that updated for the past 40 years.

The alien design is really pretty good.  Weird, utterly inhuman, large, uncanny, but it's not quite the best of the 1950's-era aliens.  But, still... I like them.  A lot of thought went into these guys. 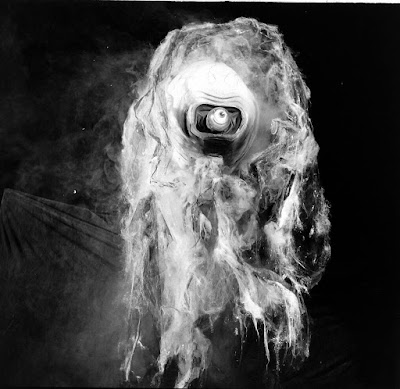