Austin Books and Comics and the Remarkable Labor Day Sale

I've been exceptionally lucky to be able to say that my Local Comic Book Shop is the astounding Austin Books and Comics.  I grew up in Austin, and Austin Books is a big part of how and why I fell in love with the medium as a kid.  For good or ill, I've now been shopping here off and on for 28 years, and I never think "well, I've done everything I can do here.  I guess I'll go collect some stamps."

I started buying my comics off the spinner-rack at the local grocery, at news stands and at convenience stores.  Then, at some point I looked at the ads in a comic book and realized there were specialty stores, and I assume some path of logic there led me to finding Austin Books.  I can't say I recall my first trip there, just that we stopped in as often as KareBear would load us in the van from North Austin and deposit us at the store.

Back then it was a big store, as comic shops went, but  nowhere near the footprint today.  That, and it was half fantasy/ sci-fi books and posters and whatnot, and half comic book shop.

I moved away in high school and had some decent shops in the Spring, Texas area (Bedrock City showed up when I was in college, but I don't recall the names of the other two shops that have since gone under).

In the late 90's and early 00's, the store was purchased and began the transformation to what it is today.  I won't bore you with the details, but around 2007 they began finding new events and ways to expand.  And, in 2015, Austin Books is now a complex that includes:


And, the staff is incredible.  Owner Brad has really got the business sorted out, has insisted on a professionalism that remains friendly but never falls into that "Boy's Club" thing you can get at other stores.  Day-to-day, manager Brandon somehow keeps the whole place going.  And there are loads of employees who have tremendous knowledge of comics, toys, comic history, and they can help you find something on the shelves.

The Labor Day Sale is currently on, and I've done quite well.  This year I focused on all Superman titles, as that's my current collecting focus (I'm about wrapped on Wonder Woman Vol. 2 and the remaining Enemy Ace appearances I've got are a little spendy).

For details on the sale, go here.

But I had a good bit of fun looking, and wound up with new (to me) issues of Action Comics, Superman, Superman's Pal - Jimmy Olsen and made a spike in my modest Superman's Girlfriend - Lois Lane collection.

I got to the sale on opening night, and headed straight for The Sidekick Store.  I was looking at 2-for-1 Superman issues when I sensed a disturbance in the force.  Brandon got this picture or me just before I looked up.

(all photo credits on this post go to Austin Books and Comics.  I'm assuming they won't be pissed I'm saying something nice about their store)


I headed back Sunday after running some numbers and picked up some Lois Lane issues I had not picked up Thursday.

Meanwhile, the sale rages on through Monday.

Here's part of (not all of) the graphic novel selection at Austin Books.  You can see other items like t-shirts and Pop! Vinyls there.  You can't see the toys to the back left. 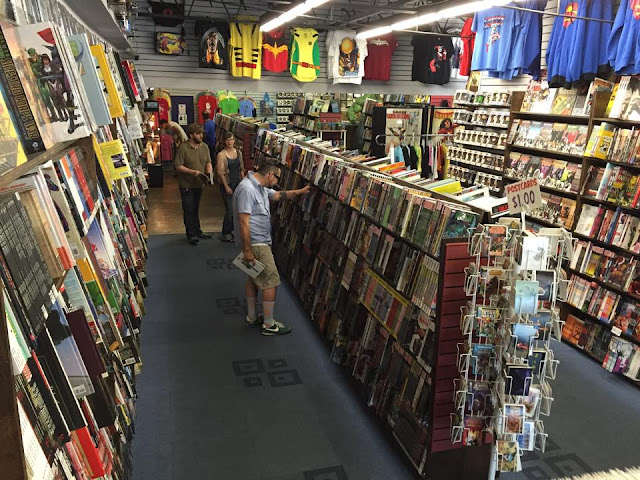 Here's the Back Issue area. 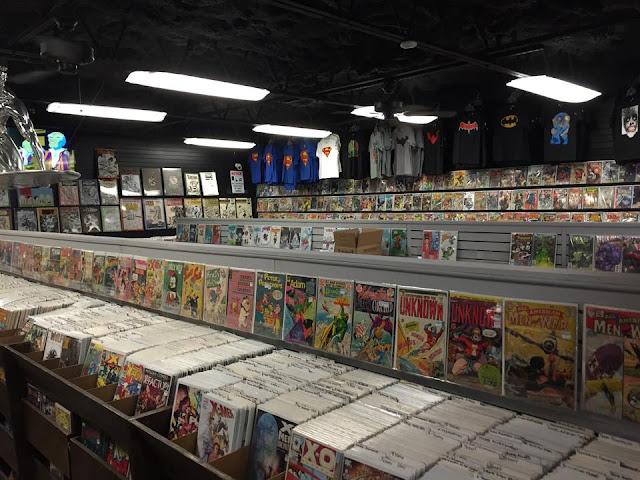 These aren't the Showcase, more high-end back issues.  All the issues here are the kinds of back-issue quality you need for a decent collection, so they're in good shape, but the super nice stuff tends to be behind the counter.

I spend a lot of time in these shelves at Austin Books.

Way in the back you can see those IDW Artist's Editions.  And Silver Surfer hovering over the back issues around "S-T", I'd guess.

Yeah, the place is amazingly large.  No idea how many square feet.  And, this is just one of the four stores.  And these pictures don't show the front, new issues, toys, and more.

Anyway, I complain a lot about what happens in the comics industry, but I do still live the back-issue hunt and the search.  And, of course, the good folks at my LCS.  So I wanted to spotlight what a darn good store I'm lucky to have here locally.  I have no doubt it's this place and it's dedication to all aspects of the medium and hobby that have kept comics fun.

Even when I'm rolling my eyes at the latest cross-over mishap, or wondering why Superman is doing what he's doing this week, I can always go digging into back issues or ponder the imponderables of a Joe Kubert-drawn comic and if I really need a Tarzan comic I didn't know he'd drawn.
Posted by The League at 9/07/2015 12:12:00 AM