So, since the movie showed up, I gave it a whirl. 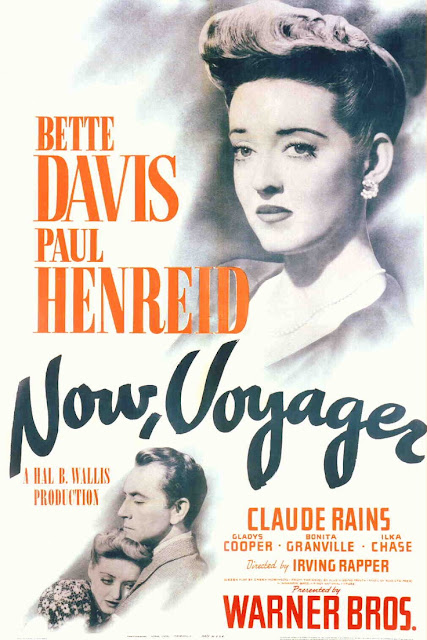 There's no question the movie is dated by any number of factors, from the club-like effectiveness of psychiatry to the social customs present in the movie.  And it's certainly a movie of war-time America, not in content, but who appears in the film (there's a shortage of name actors playing men of fighting age).

The movie belongs to Bette Davis, there's absolutely no question.  And that was what I paid my $2.50 for.  I may not have been the target audience for a "woman's picture", but I knew what it was, to an extent, going in.  I'm trying to shore up some gaps in my movie knowledge, and I haven't seen that many Bette Davis movies, and this is one of the big ones.


Davis plays Charlotte Vale, a woman born late to a Boston socialite.  Charlotte has become a spinster, living in her mother's gigantic house, still cowed by her mother and living by her rules well into her 30's.  The one great romance of her life took place years before and was ruined by her mother.

Her sister-in-law brings a noted psychiatrist (Claude Raines) to visit, and he believes Charlotte is undergoing the beginnings of a nervous breakdown.  Charlotte goes to his sanitarium (a bit of a summer camp, really), and begins to find who she really is.  After making serious progress, rather than go home, she's sent on an ocean voyage to South America where she meets fellow traveler, Jerry Durance (Paul Henreid), with whom she begins a sort of romance.

He's married, unhappily, and they know time is short and it's all pointless.

Charlotte returns from the trip with renewed energy and a new outlook, and upon coming home, is no longer able to live as before beneath her mother's domineering influence.  Durance continues to touch her life in ways neither predicted.

It's a bit of a sudsy soap, and I'm glad to report that it's far from terrible.  It's melodrama, certainly, and not in the way you'd mean it in the derogatory sense of the word.  The stakes are low, but it is one person's journey to uncover themself well after they should have in life.

In some ways,  Charlotte's coming out reminds me a bit of Julie Harris' "Eleanor Lance" in The Haunting (1962).  Only without the paranormal horrors.

There's a certain smooth charm to the entire movie, and it will most certainly make you want to take up smoking - the activity shared between Davis and Henreid to either replace or simulate sex for us in the movie.  But we get soft-lit shots of a beautifully dressed Davis (post-transformation, anyway), and a charming Henreid aboard ship and in exotic locales as well as within the confines of Boston.

I also really appreciated the non-fairytale ending.  I don't want to get into too many specifics, but it doesn't wind up with a deus ex machina moment for anyone, and it feels oddly natural, even as absurd circumstances may have gotten us to that point.  But it makes for an open-ended, more satisfying bit of closure.