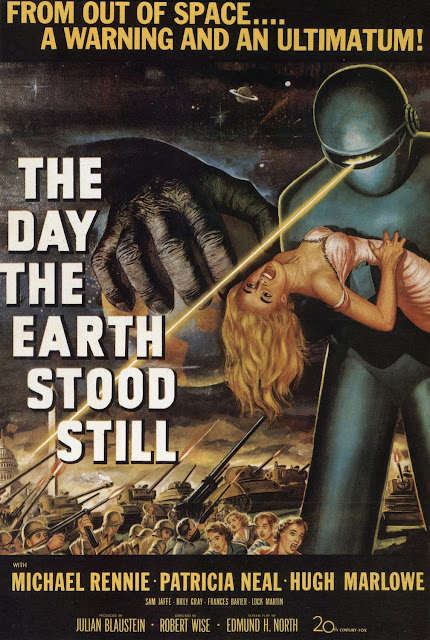 It's been forever since I watched The Day the Earth Stood Still (1951), and I wish that weren't so.  It's easy to bag on any movie from this era of self-serious science fiction, of lantern jawed scientists and sweetly passive women who just want to help our hero by making coffee or getting out of the way.  It's dated.  Right.  Got it.*

I will say, there's really nothing better than the scene with three doctors lighting up their Lucky Strikes and pondering the incomprehensibility of our visiting alien's medicine and lifespan.  That, you can take to the bank.

Six years on after the end of World War II and the bombings of Hiroshima and Nagasaki, director Robert Wise (a director with just an astounding filmography) lensed one of the most influential films of the era, and I'm not just counting sci-fi, where the impact was absolutely mind-boggling.  Where Gojira looked back at the nuclear nightmare as having unleashed an unthinkable beast as a testament to man's folly, The Day the Earth Stood Still stood as a warning about hubris, about our place in the universe as we believed ourselves now unstoppable.

A spacecraft comes to earth, circumnavigating the planet and drawing the direction of the military and media, but travelling at such speeds that they can't intercept the craft before it lands near or on the mall in Washington D.C.  A door opens and a helmeted spaceman exits, followed by a large, metallic robot.  The spaceman presents a gift which is interpreted as a weapon by a trigger-happy, scared soldier, and our spaceman takes a bullet.  This leads to the robot melting the weapons of several soldiers with a ray from his eye.

The spaceman is whisked away to Walter Reed to get patched up, where the earthmen learn that their visitor is, biologically, human.  He requests a meeting with leaders of all the world's nations at once and frustrated when he is told this is impossible, he escapes the hospital to learn more about humanity and why he's being told the leaders won't come together to hear his message.

He meets a widow and her son, wears a suit with aplomb, and gains the trust of the Neil deGrasse Tyson of his day.

What's fascinating about the movie is not that it's anti-war or anti-nuclear weapons.  That was a staple of 1950's-era science fiction, and whether this was ground zero or not for that message is a little moot.  What I find interesting is that our hero, set up as a Christ figure in some neon-sign-obvious symbolism ("my name is Carpenter.  Excuse me while I die and come back again with a message."), does not undergo the usual coming-to-grips-with-flawed-humanity bit and give humanity a pass on being human.

Klaatu just straight up tells everyone on Earth that if they look skyward with their new nuclear weapons, space robots are going to show up and kill every last one of them.

It's not exactly the Christ-like message of renewal and second chances and grace we may have been hoping for.  It's an unveiled threat from a guy who just proved this was a distasteful but, apparently, necessary part of a planet's maturity.  There's not any room for hope there, there's an insistence that we'd best get our act together as a species or not bother trying to advance.

All along, Klaatu has smiled at our foibles as a patient parent, no different with Bobby the kid than he is with the famed astrophysicist.  But in the last minutes of the film - perhaps pissed he'd been shot to death - the gloves are off.

People don't give special FX of the 1950's enough credit.  The 1930's certainly some interesting practical work in everything from Wizard of Oz to Things to Come.  The 1950's brought us some great new visual FX in everything from Gort the Robot's metallic form to laser beams and the seamless integration of the spaceship, all of which would similarly show up in Forbidden Planet and War of the Worlds, all now just part of the visual possibilities.

The cast of The Day the Earth Stood Still is a bit difficult to love.  I do like Michael Rennie, and while his Klaatu is a bit stiff, that makes sense.  I just... eh... Patricia Neal.  Always just felt like a strict elementary school teacher to me.  Weirdly patrician when she didn't need to be.  But I do like Sam Jaffe as the astrophysicist. You have to like a guy who moves this well between a movie like The Asphalt Jungle and a sci-fi epic while still playing essentially the same guy.

It's hard to know exactly why or how a movie resonates with you, but certainly this film has rattled around in my head a fair share for a movie I've only seen 3-4 times.  It's terribly well directed and fun to look at.  But I absolutely dig the message of the movie - "okay, humanity.  Things just got real.  You need to grow up."

It's not a movie that let's the universal "us" off easy, something that happens all too often in movies (less so in short stories, it seems).  It puts a real challenge before "us" and we act like children, failing to comply, and lashing out in the most childish of terms.  Any being who comes to help us, Klaatu or a Nazarene, doesn't stand a chance.  But that reluctance to change may not be on the table forever.


*if one thing being online in 2015 has taught me, you'll only be punished for attempting progressive media by the generation that will come along next and mock or become angered by your attempts to stretch
Posted by The League at 9/10/2015 05:22:00 PM

Admittedly I didn't have my complete attention focused on the movie, but I don't at any time recall the robot picking up a negligee-clad woman.

You gotta get 'em in the theater, and Patricia Neal don't do negligee.