Slaughter in South Bend: The Longhorns Go Down in Flames 38-3 to Notre Dame 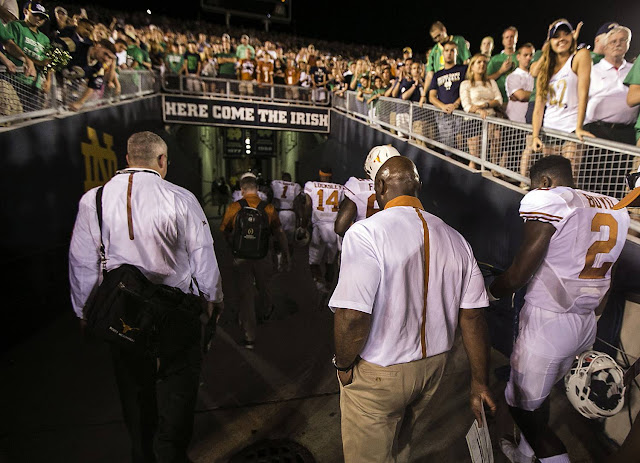 UT Football has been having a rough patch the past few years.  It was bad enough two seasons ago that we saw the dismissal of Coach Mack Brown, the same Coach who took UT to two National Championship games, one of which we won!  It was a good night, I promise you.

We played our second National Championship game under Brown as recently as 2010, but that didn't go super well.  Alabama.  What are you gonna do?

But after that, the steam went out of the UT program, and even before the conclusion of the 2013-2014 season, it was clear Brown was on his way out.  We recruited Coach Charlie Strong from Louisville, a place where Strong - in 3 seasons - had found tremendous success.  Thus far, none of that has rubbed off on Texas football.


For reasons that make no sense to me, UT has had two major offensive problems under both Strong and Brown.  (1) We haven't had a top tier quarterback since Colt McCoy busted his arm against Alabama and (2) We haven't had an offensive line of note since, practically, the Vince Young era.  It's kind of hard for a second tier quarterback to execute when, the moment he drops back and looks up, there are four defensive players in their face.

Our defense has been mediocre at best since Will Muschamp left for Florida and the Manny Diaz experiment flamed out terrifically fast prior to the Charlie Strong regime.  Now, I think Vance Bedford, UT's current Defensive Coordinator, is no chump.  And he is still dealing with the players he inherited from the Mack Brown defensive disaster of prior years.  But, still...

Last night we witnessed the University of Texas Longhorns headed to South Bend, Indiana to play the Fighting Irish of Notre Dame.  I'm sure this seemed like a cute idea when the deal was struck, UT was playing in Championships and Notre Dame wasn't all that great.  Well, the worm has turned, and last night UT lost the game 38-3.

3 points.  And we gave up 38.  I'm not sure Notre Dame even looked all that amazing or needed to do all that much.  Texas just looked that bad.

Obviously, offensively, UT couldn't perform at all, and, again, our quarterback situation is still a mess.  I think Tyrone Swoopes is probably a decent guy.  He's no blowhard.  But it's not clear he provides any leadership to the team, and he's consistently inconsistent.  Every game he throws one or two amazing passes worthy of McCoy (Colt, not Case), but then he makes weird mistakes in easy routes, and you can see his own receivers going apoplectic.  Again, it doesn't help that UT's offensive line seems to believe their job is to provide a series of courtesies to the defense as they go after Swoopes.

It got so bad, we were celebrating first downs like touchdowns.

And, yeah, the defense.

Here's the deal - I really like what Coach Strong is trying to do at Texas.  After the National Championship games, it did seem the players just assumed that they'd be able to just merge in with the Longhorn program and by virtue of being at Texas, they were already there.  They'd be in bowl games and get to be football celebrities.  I dunno.  But when you compared the gridiron down and dirty mentality of the Vince Young era or the technical know-how of the Colt McCoy era, it's been a lot of second-tier looking players playing Longhorn dress-up.

I remember the 80's and 90's in Longhorn football, and it wasn't pretty.  It's very hard to get all of the right pieces in place.  Time and again there'd be a change in QB's, in coaching, it was always just around the corner.  And you have to believe that or sports has no point.  Heck, my belief in hopeless causes has me cheering for the Cubs.

Again, I want for Charlie Strong to do good.  He's getting the team and locker room in shape.  I want to think his recruiting will be back where we were in the past 10 years, and I hope we have enough time with Strong to let him sort out what he's inherited.  But, man, we have lost a lot of games.  And not by squeakers.  We're getting destroyed out there.

My biggest fear for Strong has always been that the alumni would be unforgiving of some losses, but the consensus was sort of a "well, it'd be good to won 7 games this year" sort of thing for this season.  And now?  I literally can only see the potential for about four wins this season.  Not a great way to start off the year.

Kirk Bohls From The Statesman

Cedric Golden From The Statesman

One shouldn't really judge a coach until he has his own recruits playing. I don't know how well Strong recruits (I heard Mack Brown was amazing), but this past offseason was really the first time he had a chance to recruit full-throttle so in a perfect world, he shouldn't be judged until about two years out.

I agree! I'm willing to give him the benefit of the doubt, but it doesn't mean I want to see a crippling defeat. I'm actually a bit in favor of phasing out the guys he inherited more quickly and giving the freshmen some playing time. I don't know how our younger guys would do worse. I do wonder how recruiting is going, and I hope Charlie Strong is already out there talking to promising high school QBs. We thought we had one in Heard, but UT only played him for about four plays last night (all of which I missed).