If you want to watch a movie that will make you just kind of tear up for no reason over and over, I recommend the 2014 documentary I Am Big Bird: The Caroll Spinney Story. 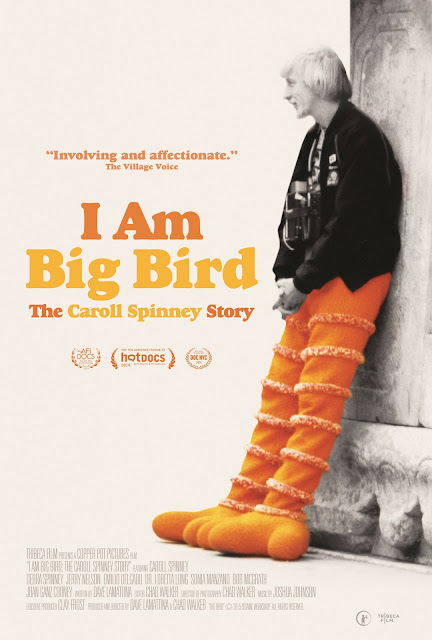 As you'd expect from the many context clues above, this is a documentary about the guy who has played Big Bird on Sesame Street since the character first wandered onto the show.   He also (and I don't know how this works) plays Oscar the Grouch.  So, there you go.  A guy you never heard of is the heart and soul of the show literally every one of you people loved as a kid.


Now, I'm going to be a little cynical and point out this movie went into production really damn fast after Elmo mastermind Kevin Clash met with some scandal circa 2012 and the documentary, Being Elmo, won all kinds of awards circa 2011.

But, nonetheless, it's a worthwhile film to catch.

The format isn't really anything new - it's a bio doc, and it's not here to dredge up anything controversial.  It's a history of the man inside the bird suit.  The producers manage to land terrific interview subjects, including old-timer Muppeteers and folks you don't see as much these days, like Frank Oz.  and you see the effect Spinney has had on the next generation of Sesame Street staffers and technicians.

And as Spinney hasn't really been changing jobs much since putting on the suit, it has to just wonder about the fellow within.  Hand-waving attempts are made to explain Big Bird's appeal and that of Oscar, and it's more than fair to point to the man who has been those characters for as long as I've been alive.  There's a great sequence on the "Big Bird Goes to China" adventure that has a nice little bow on it.

I'm okay with a doc that's just a tribute to an okay guy.  20 years ago, I had as enjoyable of an experience of watching Frank and Ollie, a low-budget doc about two longtime Disney animators/ artists, and it reminded me a bit of that.  A sweet tribute to a decent guy.

On that note, it doesn't happen often enough.  You'll see the occasional Walt Disney doc (and American Experience is airing one soon, and I'll be watching it), but you likely won't see one about Ub Iwerks, whose contributions to animation and film are gigantic in a more immediate way than even Walt's visionary reach.  So it's great to see a movie that does feature a gentleman who has flown under the radar while his creations have become beloved icons across the world.

I think as we grow up, it's easy to forget these characters who shepherded us into childhood and awareness.  We can take the craft and care that went into something like Sesame Street for granted, remembering it only as puppets and quick cartoons, and until we have reason to watch the show again - perhaps we have children of our own, for example.  You might not consider everything that went into making Big Bird work all these years, from the manual effort, to the writing, and beyond.  Certainly as a kid, Big Bird is Big Bird and not a puppet.  Wondering how that occurs, who the man inside might be, it just isn't on the radar.  But as an older audience, there's a different sense of wonder  when it comes to the sort of man who can breathe life into the character all these years on.

If, in watching the guys of American Movie we pondered what the real end goal might be for folks trying to bring an illusion to life and share something with the world (and maybe get rich along the way), we get a shot at seeing someone who has done that in his own way for the past 40 years and the rewards he's earned in doing so - 99% of which seem to not be of material wealth.  And there's something in that.