Fist things first:  as regular readers may know, one of my two undergraduate diplomas from Ye Olde University of Texas is in Communications, where I was in the Radio-Television-Film Department, and happened to be one of the lucky stiffs who went through the "Film Production" track.  Which was kind of a big deal, at least to me, as they only let in a handful of students into that track every semester.

Here, you can see my first experience shooting 16mm.*  And you get special appearances by our own JAL, occasional reader and longtime pal Shoemaker, and Kerry, who wound up selling me the very house I live in today.  Thanks, Kerry!  (she doesn't even know about this site, so, whatever).  Oh, yeah, and Michael in an alien suit that he already owned.  Because, you know, Michael. 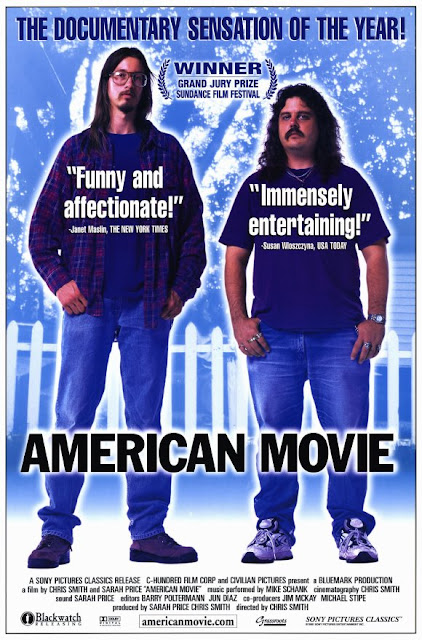 The documentary, American Movie (1999), stirs up a lot of very specific feelings for me when I give it a whirl - something I don't think I've done in 15 years.   If you've not seen it, it's the very real story of a filmmaker from Wisconsin who has a dream of making a horror movie called Northwestern.  Mark Borchardt, the film's main subject, is a high school drop out, he probably drinks too much (and, I think you can infer that drugs were or are also involved somewhere in the picture), barely holds together a job as a newspaper delivery man, is split from the mother of his three children, is 30 and lives at home with his dysfunctional parents.

Despite a lack of any formal training, a lack of experience on any other films other than his own 8mm projects, and a seeming inability to project manage himself whatsoever, Mark remains focused on the dream of finishing a movie.  Maybe.  Just maybe not Northwestern.

The movie uses the "aspiring filmmaker" as the excuse for really getting to know Mark, his family and friends, his corner of the world.  The film takes a look at what the American Dream means to a guy like Mark and his friends, guys from middle class families in middle America, folks for whom things haven't really panned out by the age of 30, and for whom it doesn't look as if things are set to improve a whole lot.

In a country built on the promise of opportunity, what does that really mean when the dream is creating a movie?  And, really, what's the dream behind the dream?

Mark is the lead, but a close second is Mike Schank, a drug casualty who seems happy just to be included.  But, man, I worry about Mike.  He's not okay, even as you can occasionally see the remnants of the person who once was poking through from time to time.  But now he's just living with his folks and playing "scratchers" instead of drinking and drugging, which he gave up well before the movie began filming.  That said, he may be the only positive force in Mark's life.  He's just a really positive guy.

In addition we meet local actors, Mark's way-too-good-for-him girlfriend, his stoic, Midwestern Dad and his Swedish, doting mom, and, of course, his poor old Uncle Bill.  Bill is probably not as old as he seems as the movie is being shot, but he gave up a long time ago, seems to like his drink, and he's sort of wasting away in a trailer park.  But he is good for writing checks to support Mark's movie-habit.

Except in "Unscripted" television, a relatively new invention, you haven't seen a lot of America show up on screen, but the reality is that a huge chunk of America looks a hell of a lot like the folks in this movie, something we don't admit to ourselves in how we see America on TV or in movies.  It's a balancing act between sympathy, gawking, what-have-you that takes a minute to shake off the feeling of exploitation.  Only 20 years ago as this started up production, I think people were still a little naive about how they might look on film.   Mark may have just as easily talked all of the participants in the film into this as he did everything else, and it's hard not to get a little uncomfortable as Mark's mouth runs and runs.

My own professional experience with "film" began and ended the same summer I graduated from college.  I never saw a big production up close.  All I ever wrangled were a couple of commercials, but when I was unavailable to work for free on the 4th of July (we had a gathering planned already when they called), I was never asked back.  I did continue to work in video production until about 2008 in one way or another, but it was always in the far more stable world of salaried jobs in higher ed, broadcasting graduate programs or making educational or promo videos.

I have pals who did give it a shot, and it's been all over the map.  To name a few:  Pals JimD and Alistair have produced their own indie feature.  Buddy Juan is a jack-of-all-trades producer of video inside higher ed.   PaulT does well as a working editor, videographer, audio recordist and editor, what-have-you.  A friend from high school worked on some big Hollywood films before transitioning over to graphic design.  Another guy works at Pixar.  And I just exchanged emails with a pal doing screen-writing for legit Hollywood studio movies.

And there are a whole lot of us who, for whatever reason, got the degree but didn't chase the celluloid dream.

My reason was:  by the time I graduated, I didn't know what I wanted to do, but I was pretty aware of what I didn't want to do.  I'd run the numbers and probabilities for astounding Hollywood success versus slugging it out in the trenches doing something I hated.  Sure, you can always go be a grip on "The Adventures of Mike and Molly", and it's a union job, and I imagine it's solid work.  And I know folks who've found that the production process itself is the thing, and that's what they want to do in any capacity.

You can also chase the dream of making your own movies, and... well, here's the thing...  There are a hell of a lot of Mark Borchardts out there.  A lot.  No, not all of them are as naive about the business, most don't have the drinking problems Mark seems to have, but there are a lot of started and unfinished films.**  There are a lot of people who got a lot of people spun up and then it just didn't... ever... finish.  Way more than any of us will ever really know.  And there are just as many that get made that just collect dust somewhere on a shelf.

But I get that fever.  I get the "let's get people together and put on a show!" mentality.  I did high school drama.  I did film school and videos for fun.  It is fun.  But when it's all on you, and it's your vision and other people's money - that's a wicked combo.  You're either a wealthy kid funding your movies from your trust fund or you're answering to someone.  And you have actors and crew and everyone else who's good humor you've got to earn and keep.

For every movie that gets dumped onto Netflix, there are so, so many movies that never leave the shelf.  I watched people I knew kill themselves working on movies that had, like, two screenings and then disappeared.  It doesn't always work out.  It rarely works out.

But we never even get to that point in this doc, and the wall between ambition and execution is so much of what American Movie is about.  What's keeping Mark from The American Dream?  His rough past?  His issues with his parents while growing up?  The booze (hint: the booze isn't helping)?  Or the malaise of just being who he is in a the place where he is?  Or all of it? 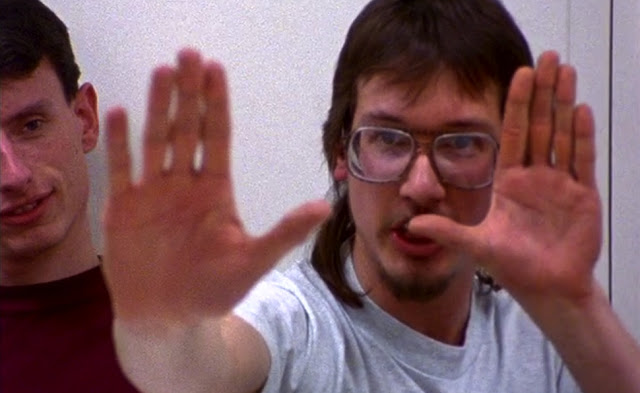 Watching the movie less than 20 years after it was shot, it's also astounding (a) how much the world has changed around film-making technology, and (b) how much harder it is to watch this movie as a 40-year-old with a legit-ish career going.  They're still using Steenbecks to cut the movie, synch-gangs and reels to put it together.  They're splicing audio with razors and tape.  All really familiar stuff from my own film-school experience (all of which was immediately outdated within three years of receiving my degree).

As a grown-ass man somewhere in the middle of his career (God willing), there are so many things you want to tell Mark or tell 24-year-old me, the same me who once watched this movie with delight.  "You just need to write it all down and put dates on it" you want to say.  "You need to do what you say you're going to do.  You need to figure out what depends on what else happening.  All of it's right in front of you."

But you can't.  And you can't tell people not to chase that dream just because you got practical or have a shockingly low tolerance for risk.

And I guess it comes back to that question of The American Dream.  Which, yeah, I guess you can say is to find security and financial well-being thanks to both the opportunity and freedom afforded you.  And if you want to make a movie, in a lot of ways, the only one stopping you is yourself, really.
Mark, despite his limitations, real, imaginary, self-imposed and external, is able to pull together at least a short film he shows off at a local cinema and plans to put out for sale on VHS ($14.95 a copy - currently going for $34 a copy on Amazon). he gets folks on his side to help him out, including his parents, in their way (pro-tip:  never use mom as a camera operator).

It's a fascinating movie on so many levels.  Not because we're laughing at Mark, we're seeing a part of ourselves with that dream of creation, and the recognition for that creation.  He may be charmingly uninhibited about how he discusses those dreams, and there's natural dramatic irony there as we hear what he's saying, see the folks going along with him following the flame of that passion, but we know - this isn't going to end well.  And it's not because he doesn't want it.

Anyway, interesting movie to re-watch after all these years.

Oh, and I once saw Mark and Mike walking around at SXSW the year after the movie was a festival splash.  Mark is super tall, something you don't really get out of the movie.

*be nice, y'all.  I was 20, had only worked with video before, and had my cast for a total of about 3 hours on a hot day.  And, as always, was just trying to amuse myself.