I may not have been the most excited kid on my block for the Star Wars prequels in 1999, but I was pretty darn pumped.  I like to think I had some serious Star Wars nerd-credentials back when that meant something, back in an era when the internet was not around to provide you with an endless amount of trivia via a super computer in your hand.  I could name most of the characters, vehicles, planets, had the posters, the toys, etc...  Grew up with the bedsheets, the wallpaper, all that.  Typical American 80's kid.  No, I didn't have a tattoo or anything, and I certainly didn't quit my job to go sit in line for weeks until the tickets went on sale.  In short, I was a pretty big fan, but I hadn't made it a lifestyle.

Mid-tier nerd.  I know there are people out there who actually run around training to becomes Jedis.  Folks gotta do, I suppose. 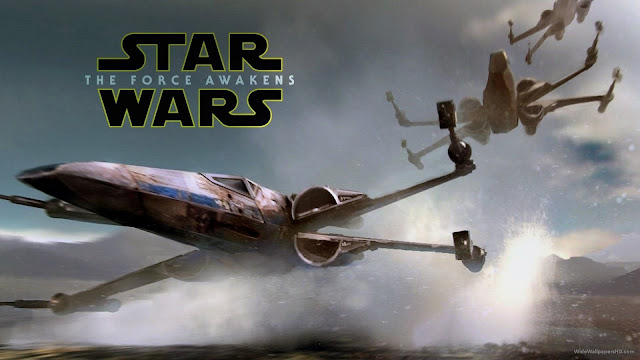 Prior to the movie, I went out and bought the toys when they arrived at Toys R' Us, and before that I'd been buying the re-issued toys.  I remember having to explain to my pre-Jamie girlfriend that, yes, I WAS going to buy an X-Wing fighter, right in front of her.

I was never much of an expanded universe guy.  I guess I knew from a young age that anything not in the movies-proper didn't "count", and that the books at B. Dalton and Waldenbooks were a cash grab as much as the Marvel comics with the green rabbit character, but nothing the movies wouldn't run over in a second as it seemed laughable that George Lucas read any of that material.

When Episode I came out, Jamie and I stood in line - she, fresh out of the hospital, and wearing my Darth Vader helmet (it wasn't a size 7 7/8ths helmet, so it never fit me) and carrying my Vader light saber (I carried my green Luke light saber).

We were in one of three or four midnight showing screens at the Gateway theater in North Austin, and there was a huge party atmosphere.  Light saber duels on the stairs and people cheering hard against the late hour.

The credits came up, we cheered.  I remember thinking "oh, this isn't entirely what I expected", and just let it wash over me.

Walking out of the theater, a couple of guys right in front of me were laughing in agreement about how awful the movie had been.  "Surely they can't be right," I said.  "It didn't match my expectations either, but that doesn't mean it's bad.  And that kid shouting 'yippee!' was kind of dumb, and the midichlorians bit was unwelcome, and Jar-Jar was...  weird.  And the Trade Federation guys seemed a little, uh...  But that movie rocked!"

I saw the movie a number of times in the theater that summer, and I remember having long email exchanges with JimD and my brother-in-law, The Dug, as I defended the hell out of a movie I'd waited so many years to see.

It was watching the movie on VHS (DVD existed, but Lucas was afraid folks would put the movie online and refused to put it on DVD for a brief window there) that I got to the pod race scene and then...  man.  I turned it off, went and typed some apology emails to JimD and Dug, and I don't think I've seen the movie since, not all the way through.

In short, I'm one of the people who hates the prequels and will admit that they kind of ruined Star Wars for me in a lot of ways.  They told a story I might have liked to have seen told, but in a way I found utterly confounding and uninteresting.

The fact I can't see the original versions of Episodes IV-VI in any legal way using modern home video or at the theater hasn't helped in the slightest, btw.

When we moved away from Phoenix in 2006, rather than find a home for my Star Wars stuff or pack it, I sold it en masse to the guy who ran my comic shop.  That included X-Wings, B-Wings, AT-ATs and even Princess Amidala's royal corvette playset.  I still have a few figures from when I was a kid.  The only Star Wars items I've purchased since 2006 I can think of have been an Admiral Ackbar figure and one of the Hot Wheels Millennium Falcon toys that just hit the shelves.  That Falcon set me back $4.99 and reminds me of my favorite parts of Star Wars that don't include Carrie Fisher in a snow suit.

Since 2006, and because I haven't watched the prequels in about a decade, I've softened on Star Wars, and I watch with crooked eyebrow as a generation has come to all six movies with the same enthusiasm I had for the original trilogy.  But, man, the only fond memories I have of those prequels are actually going to see them with friends and the vehicle design.

Frankly, by anyone's standard, I have no idea how you can be over 10 years old and get really excited about the Star Wars prequels, but people do.  People also eat paste.  I do not understand them all the time.

If I am a bit surprised people are so excited about the new movie, or at least that they've so utterly thrown caution to the wind once again, it's that:  We did this once.

We're acting like a guy who got dumped by a girl, who is getting ready to go out with a girl exactly like the one who broke his heart, and he's the only one who can't see the room for error here.

And, frankly, now we're excited that they guy who brought us the bludgeoning madness that was Lost and the lackluster Star Trek reboots (and who wrote a Superman script - unproduced - that was more or less just The Matrix and which makes Man of Steel look like a work of genius) is the one at the helm.   I'm not saying JJ Abrams is a bad director or writer, but he may have some issues with getting past the first act of a story.

I am also not saying The Force Awakens will not be good.  I am making no such prediction.

What I am saying is:  if you don't see me buying the t-shirt or buying tickets well in advance, it comes from a place.  A place that truly and dearly loves the original Star Wars trilogy, but which also knows that the last time we felt like we were really watching a Star Wars movie was 32 years ago when we walked out of Return of the Jedi, hand-in-hand with my folks.

I'm now 40.  My tastes are not, shock of shocks, what they were between 1977 and 1983.  I have an investment in Star Wars, but a deeply tempered one.  A few CGI shots in a trailer aren't enough to tell me anything in 2015 when whole scripts are written around what will look good in a trailer.  I may actually need for this movie to be, you know, ACTUALLY good, not good enough to move toys (see: Transformers).

The movie is being marketed so heavily that attendance already seems mandatory.  That's okay.  It's been a while since a real event movie seemed to have gripped the imagination of the public.  But I suspect that by New Year's Day, we may be begging for mercy from another soup, Coffeemate, or other tie-in Star Wars commercial once the buzz has worn off a bit.

I love Wookies and and Lobots and light sabers and X-Wings and Princess Leias and all that stuff.  But I also know that this is not those movies.  This is something new.  So, I'm gonna wait for a few reviews before I start losing my mind two months in advance.
Posted by The League at 10/20/2015 12:38:00 AM

We will buy tickets well in advance. If for nothing other than the simple but fervent hope that it MIGHT be good.

I'm not dismissing the possibility. I just refuse to get all in a tizzy all over again.

Question: Have you seen the BBC show Spaced? Because, you need to if you haven't, and if you have watch it again. It's great.

I did see it. Probably my first "binge watch".