I can't remember the last time I actually read Washington Irving's story, The Legend of Sleepy Hollow, but it remains a fun, spirited read, perfect for a quick fix of harmless Halloween fun as we head to the holiday. 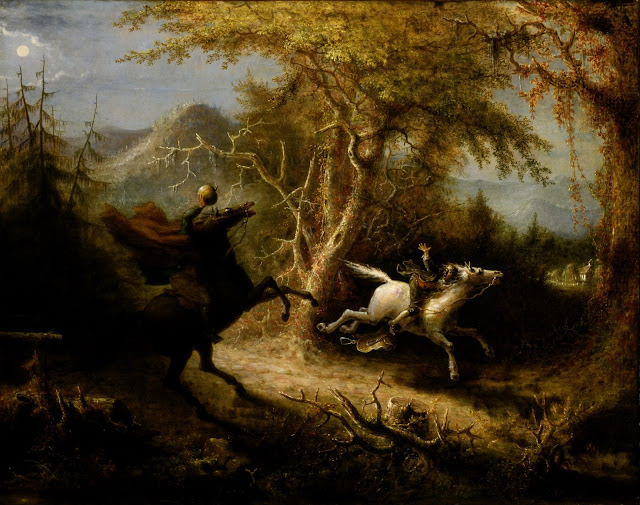 I was quite pleased to realize the audiobook I'd downloaded was read by actor Thomas Mison, who plays Ichabod Crane on television's Sleepy Hollow, and an actor that is just begging for a part somewhere in the Marvel U, but I'm not sure as who, exactly.

If you saw the Disney cartoon or a hundred other adaptations, you know the story - though, ironically, the one place you absolutely will not get the story of Sleepy Hollow is from the television program of the same name, which went off the tracks and into a ditch immediately with its second season and is struggling to make a comeback with the third.

The book, itself, is relayed not so much in a spirit of spookiness, but in good humor that still translates - and, frankly, translates the long gone world in which the novel was written for the modern reader.  The book serves a vastly different purpose than The Haunting of Hill House.  It's a spooky tale meant to reassure the reader and comment upon the Americans of the era and geographic region in folksy ways, and it's practically a cartoon waiting to be adapted, as Mr. Disney did in good fashion.

Because it's of interest, I'll mention the inclusion of black characters in the story in both a caricaturist fashion and as observing faces who clearly find Ichabod Crane absurd so the narrator doesn't have to spell it out.  I don't expect too much in the way of progressive writing in popular fiction of 1820, but it certainly isn't exactly as offensive as one might find elsewhere.

Really, all the characters of the book are broad caricatures in a way, simple impressions to get the general idea across, and when Irving does get specific about Crane, in particular, the idea is to politely understate the absurdity of a self-important buffoon.

The description of the Horseman and ride are vivid, Irving painting a tremendous picture of the Crane's confrontation.  I have to imagine all of this would be a lot of fun to read to a kid at some point.

When I taught ESL, I was surprised at how interested in American holidays my students always were. I taught the reading/writing component of the course, so we read an ESL version of Sleepy Hollow and watched the Disney cartoon. They ADORED it. It was amazing to sit in a classroom full of adults from all over the world and find how much they got from it, especially since, at that point, I had taught college students for years and knew their reaction would be quite different. Though I have a lot of wonderful memories from teaching those students, watching Sleepy Hollow with them is probably a favorite.

So, I was briefly in grad school about ten years ago (don't ask). And one of my classmates was from China and wanted to know what "Thanksgiving" was, and I started trying to explain why we celebrated it when the girl who sat next to me said "It's a day we celebrate the subjugation of Native Americans and white imperialism by eating too much." I had a lock of walking-back to do from that explanation.

But, yeah, Sleepy Hollow is really much better than it has any right to be, given how simple the story is. And the Disney Cartoon is maybe the most faithful of all their adaptations, but it's pretty-Disney-riffic to begin with. I'll be returning to it every once in a while on Halloween as I return to actually read Christmas Carol about every 7-10 years.