In my book, there are a few places you can say that really changed comics.  The publication of New Fun Comics, Action Comics #1, Detective #27, Sensation Comics #1, Amazing Fantasy #15, Fantastic Four #1, Crisis on Infinite Earths, Watchmen...  stuff like that.

We can break down how each of those changed comics, and some were in large, cultural shift-y kinds of ways, while others took more time to reveal themselves. 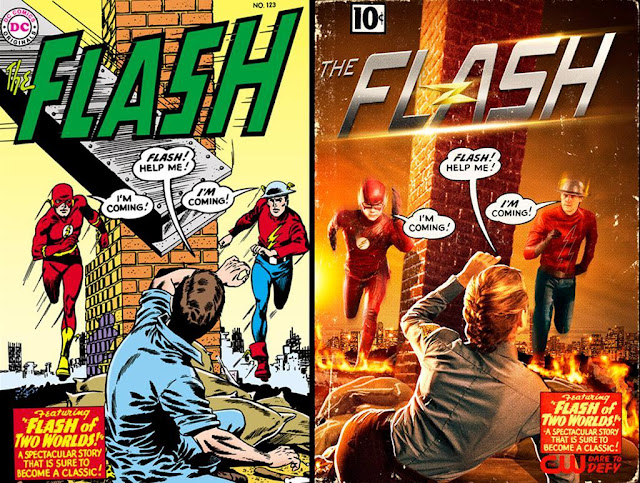 Flash #123 is one of the places you can put your finger on that changed comic books in ways no one anticipated at the time.  Pretty remarkable that between the first appearance of Barry Allen in Showcase #4, which I'm saying is the start of the Silver Age, circa October 1956, and the Flash of Two Worlds issue, circa 1961, we saw two huge changes in the state of comics thanks to one character (and, I'd argue, to a lesser extent in how Barry Allen dealt with his villains in those early issues).  Today, it's almost impossible to imagine modern comics from any publisher without the concept of a multiverse (see Marvel's current Secret Wars event or the many worlds of Archie Comics).

The multiverse exploded the possibilities for comics, for alternate universes, and became a staple of sci-fi in everything from Star Trek's "Mirror, Mirror" episode to the existence of shows like Sliders and Fringe.  And, of course, is part of mainstream physics at this moment in time.

So, of course, it was tremendously fun to see Jay put on the helmet on a legitimate TV show. 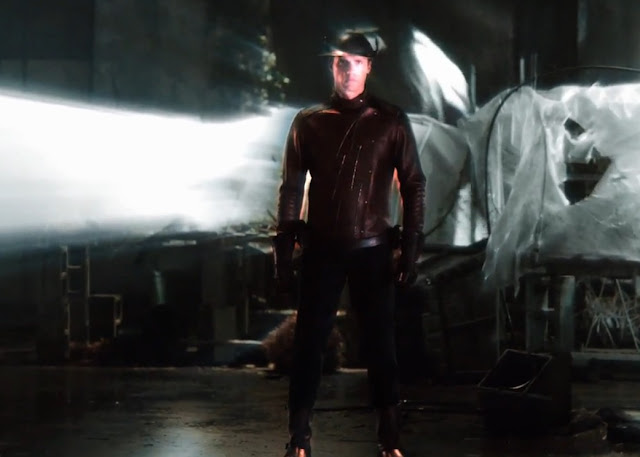 The episode also took on the laborious task of explaining DC's multiverse, made a passing reference to the exhausting and unnecessary conceit of 52 Earths (just make it infinite...  you'll save everyone time and energy), and introduced Bronze-Age Flash romantic foil Patty Spivot.  A minor character who has resurfaced with force in the New 52, I am told.  I've not been reading The Flash.  Sorry.

Jay's look, from Flash Comics #1, has been pretty rad, so it was nice to see the show decide to riff on not just on the winged-mercury/ doughboy helmet of the comics, but keep the basic look and feel of the comic without just making it a red t-shirt with a lightning bolt over some blue yoga pants.


Probably a good idea to alter it all a bit.  I mean, it's neat in concept, but on TV...  I can accept some change.

The episode is, like the season premier, pretty simple.  Or, at least, not very deep into character as we make way for plot.  We've got a lot of territory to cover and exposition to cover, and we can all thank Victor Garber as 1/2 of Firestorm, Dr. Martin Stein, for being A-list enough of an actor to handle the DCU explanation like a pro.

And, hey, CW, it's probably okay to not make Joe a big dummy who says things like "In English!" whenever someone mentions something more complicated than "bad guy shoot gun".

They really need to find a way to make Iris's life as a reporter work into the plot better, because right now, it's just lazy to have her standing around STAR Labs all day, like she has no job, contributing literally nothing to the group other than moral support.

Cisco has begun to demonstrate what his power will be, and I am a bit surprised this is the route they're taking.


The introduction of the perky, spunky Patty Spivot is one of those things that, if handled well, could be all right for the show.  Or, it could become an exhausting Mary Sue window into the Flash universe and a bit of unnecessary weight on an already bloated cast.  Let's give the character some time.

The appearance of Iris' mother at the end of the episode was, yeah, a bit surprising.  So, I guess we'll see what's up with that.

As for the "Sand Demon" Plot:

I can't help but notice that 2 of the past 2 villains are riffs on Justice Society characters, but showing up as bad-guys.  Last week's Atom-Smasher went back and forth as a character from hero to villain in the comics, and while Sand Demon is a not a character I recall from the comics, the silicate-based Sand (Sandy Hawkins) absolutely was, although he had a different alias.  So I'm not sure what to expect.  Is this season bringing us Star-Spangled Kid and Stripesy as bad guys?  Wildcat as a villain?
It also broke down Eobard Thawne as Reverse Flash and made his third name, Zoom, a completely different character, merging him with the Black Flash or Nega-Flash or whatever, a character I kind of remember from early New 52 comics.

All of this is fine.

This is a show that has a lot going on, and it can be hard to keep up with all the moving parts.  Still, it's holding together better than I'd expect, and they are still going full force by remaining unapologetic that this is a Flash show set in a DCU.